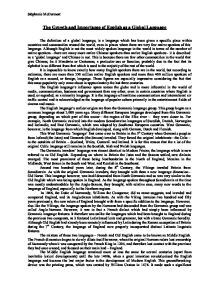 The Growth and Importance of English as a Global Language.

The Growth and Importance of English as a Global Language The definition of a global language, is a language which has been given a specific place within countries and communities around the world, even in places where there are very few native speakers of this language. Although English is not the most widely spoken language in the world in terms of the number of native speakers - there are many more native Chinese speakers than native English speakers - it is described as a 'global language' and Chinese is not. This is because there are few other communities in the world that give Chinese, be it Mandarin or Cantonese, a particular use or function, probably due to the fact that its alphabet is so different from that which is used in the majority of the rest of the world. It is impossible to know exactly how many English speakers there are in the world, but according to estimates, there are more than 350 million native English speakers and more than 400 million speakers of English as a second, or foreign, language. These figures are especially impressive considering the fact that this mass popularity only came about in approximately the last three centuries. The English language's influence spans across the globe and is more influential in the world of media, communication, business and government than any other, even in certain countries where English is used, or regarded, as a minority language. It is the language of maritime communication and international air traffic control and is acknowledged as the language of popular culture primarily in the entertainment fields of cinema and music. ...read more.

This is due to the fact that many of these countries have numerous different regional dialects, for example in India (which utilises English as its official language) a census recorded over 200 different mother tongues even though the Indian constitution recognises only 18 official Indian languages. The colonisation of the United States in particular made a great impact upon the use of English as a global language. As early as during the 1750s, renowned philosopher and writer David Hume rightly stated that, 'Our solid and increasing establishments in America promise a superior stability and duration to the English language'. This is because during the 1800s, England was firmly establishing itself as the 'workshop of the world', and with the onset of the Industrial Revolution, during which, England paved the way for the invention of technological wonders, America gained speed in the race for economic power. With the invention, in the early 1900s, of steam technology, came the real breakthrough in the globalisation of the English language, as the press became mechanised and so news about British and American technological developments travelled further, and more frequently, to the colonies by the new railways and steamships. The news of these miraculous inventions now reached the rest of the world with such haste, and international markets soon realised that if they wanted to make a significant impact during the Industrial Revolution, they had to improve their knowledge of what technology was being invented. As much of this technology came from England and America, the directions about how to use the machinery were written in English and so foreign traders had to learn English, or at least have enough capability to ensure basic understanding. ...read more.

Through watching these movies, people abroad are learning the English language, whilst being entertained. The same can be said of the power which American television has over the world, and its obvious benefits. For example, two hundred and fifty million Chinese people (more than the population of the United States itself) are learning English on TV. Popular culture, in particular pop music, also affected and is still affecting the growth and spread of the English language. The phonograph - the first machine which could ever record and reproduce sound, was invented in America in 1877 by American, Thomas A. Edison. Most of the significant technological developments made in the record industry therefore took place in America. The invention of LP disks and records was obviously not the beginning of music, but it gave music the ability to travel across the world without the composer or artist having to travel themselves. It therefore allowed other countries to experience foreign music, especially American music, which was increasingly popular because of its often fast-paced beat which was ideal for dancing, which symbolised the carefree notion which Europe, during the First World War, craved. In conclusion, the English language's label of 'global language' is one which is entirely founded. It has proved its dominance all around the world, its power has spanned many centuries, and today, with the internet - the means of communication of the future - recording 94% of its sites as being written in English, it is safe to say that it will continue to do so for many future generations. St�phanie McDermott ...read more.

Well written and logically structured essay which shows evidence of detailed research and wider reading. Historical facts are well researched and sometimes supported by appropriate quotes. Writer explores in detail many factors which contributed to growth of English.