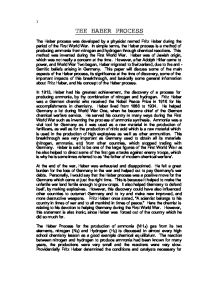 THE HABER PROCESS The Haber process was developed by a physicist named Fritz Haber during the period of the First World War. In simple terms, the Haber process is a method of producing ammonia from nitrogen and hydrogen through chemical reactions. This method was invented during the First World War. Haber was of Jewish origin, which was not really a concern at the time. However, after Adolph Hitler came to power, and World War Two began, Haber migrated to Switzerland, due to the anti-Semitic beliefs arising in Germany. This paper will discuss some of the main aspects of the Haber process, its significance at the time of discovery, some of the important impacts of this breakthrough, and basically some general information about Fritz Haber, and his concept of the Haber process. In 1913, Haber had his greatest achievement, the discovery of a process for producing ammonia, by thy combination of nitrogen and hydrogen. Fritz Haber was a German chemist who received the Nobel Peace Prize in 1918 for his accomplishments in chemistry. Haber lived from 1868 to 1934. He helped Germany a lot during World War One, when he became chief of the German chemical warfare service. ...read more.

The chemical formula for the Haber process is: N2(g) + 3H2(g) 2NH3(g) + heat The Haber process is used to manufacture ammonia, from nitrogen and hydrogen. Subsequently, ammonia could be used to make nitric acid, which reacts with ammonia to create ammonium nitrate. This is one of the essential fertilizers used today. The raw materials which are required to create ammonia are air, for nitrogen, and methane and water, for hydrogen. If methane and steam are combined to react, carbon dioxide and hydrogen are formed. Hydrogen is acquired from the air by the process of fractional distillation. Fractional distillation is the process of separating components that have different boiling points by heating them, and then collecting the components as they evaporate. The industrial conditions to produce ammonia must have a temperature of about 450 to 500 degrees centigrade. If the temperature is raised, the reaction goes faster. With the use of the Haber process, there are positive and negative environmental issues. The benefit of using nitrogenous fertilizers is that it increases the growth of crops, and turn out to be healthier. Thus, providing higher yields, from the same investment. In addition to more food, the crops can be sold at a cheaper rate. ...read more.

The Haber process has two different uses, making explosives, and fertilizers. There is always controversy about any topic which becomes famous, and important in our life. If used as an explosive, the Haber process can have a major impact on our planet, and damaging the environment. In issues of war, entire populations can be whipped out. The question we need to ponder upon is if the use of the Haber process is worth the risk of such devastation. However, on the other hand, the Haber process is very helpful in the agriculture aspect. Fertilizers help our crops to have optimum growth. They improve the value of land, and help plants to grow better and faster. Thus, being able to sustain populations, and having adequate food supplies. However, excessive usage of fertilizers can destroy plants. We can see that the Haber process is a debatable topic, which has two contrasting sides. Over all the controversy related to this topic, Fritz Haber will always be remembered, above all, for his research, which led to a process of synthesizing ammonia from hydrogen and nitrogen. The results of his research greatly helped Germany, who was assured of nitrates for explosives and for agriculture usage, even though all foreign trade was blocked. However, in the end there will be some questions to deeply think about and consider. ...read more.