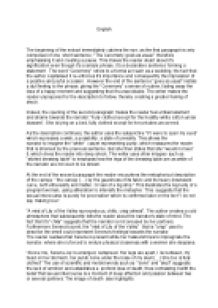 The Handmaid's Tale - commentary on an extract &quot;The Ceremony goes as usual.&quot;

﻿English The beginning of the extract immediately catches the eye, as the first paragraph is only composed of one short sentence; "The Ceremony goes as usual." therefore emphasising it and creating a pause. This makes the reader doubt about it's signification even though it's a simple phrase, it's a declarative sentence forming a statement . The word "Ceremony" refers to a formal act such as a wedding, the fact that the author capitalised it re-enforces it's importance and consequently the impression of a positive and joyful occasion . However the end of the sentence "goes as usual" instals a dull feeling to the phrase, giving the "Ceremony" a sense of routine, fading away the idea of a happy moment and suggesting that it's unavoidable. The writer makes the reader unprepared for the description to follow, thereby creating a greater feeling of shock. ...read more.

by the gauziness of its fabric and its heavy downward curve, both ethereality and matter. Or sail of a big ship." This illustrates the big belly of a pregnant woman, using alliteration to intensify the metaphor. This suggests that the s****l intercourse is purely for procreation which is confirmed later on the text "I do not say making love". "A mist of Lily of the Valley surrounds us, chilly, crisp almost". The author creates a cold atmosphere that subsequently tells the reader about the narrator's state of mind. The fact that it's "chilly" suggests that the narrator is not aroused by her partners. Furthermore Serena's scent, the "mist of Lily of the Valley" that is "crisp" used to describe the smell could represent Serena's feelings towards the narrator. The reader realises that Serena is present while her husband tries to impregnate the narrator, where she is forced to endure physical closeness with a women she despises. ...read more.

"Below it the Commander is f*****g. What he is f*****g is the lower part of my body". She refers to her privates only as the bottom part of her figure reducing herself to an object, amplifying the distance of feelings. The vulgarity and repetition of the word "f*****g" implies stress but wouldn't it be abnormal in such circumstances? Such a taboo word however deliberately produces shock to the reader. Overall the narrator is shown as her soul was not with her. She states she is not forced into this, like a form of r**e "Nor does r**e cover it" but certainly does not enjoy this. She lies on a the bed like a ghost, a spirit without soul or feeling. The act of s*x here is only for the purpose of reproduction, it's treated more like a business than the expression of love. The intense and very vulgar language comes to shock the reader making it even sickening. Through this scene the author manages to prosecute the inequality of sexes. ...read more.