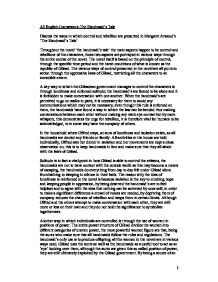 A2 English Coursework-The Handmaid's Tale Discuss the ways in which control and rebellion are presented in Margaret Atwood's 'The Handmaid's Tale' Throughout the novel 'the handmaid's tale' the main aspects happen to be control and rebellions of the characters, these two aspects are portrayed in various ways through the entire course of the novel. The novel itself is based on the principle of control, through the specific time period and the harsh conditions of what is known as the republic of Gilead. The various ways of control presented in the novel are all put into action through the oppressive laws of Gilead, restricting all the characters to an incredible extent. A key way in which the Gileadean government manages to control the characters is through loneliness and enforced solitude; the handmaid's are forced to be alone and it is forbidden to make conversation with one another. When the handmaid's are permitted to go on walks in pairs, it is necessary for them to avoid any communications which may not be necessary, even though this rule is enforced on them, the handmaids have found a way in which the law can be bended thus making conversations between each other without making any stark eye contact but by mere whispers, this demonstrates the urge for rebellion, it is therefore vital for humans to be acknowledged, to in some way have the company of others. In the household where Offred stays, an aura of loneliness and isolation exists, as all handmaids are denied any friends or family. All activities in the house are held individually, Offred eats her dinner in isolation and her movements are kept a close observation on, this is to keep handmaids in line and make sure that they all abide with the laws of Gilead. Solitude is in fact a vital point in how Gilead is able to control the citizens, the handmaids are not to have contact with the outside world as this may become a means of escaping, the handmaids do everything from day to day life under Gilead alone from bathing to sleeping in silence in their beds. ...read more.

Items such as books and magazines are seen as a source of knowledge and therefore stated as being forbidden, even in the red centre the aunts try their level best in diminishing the knowledge from the handmaid's minds. The reason that Gilead has a strict policy against reading and writing is because the handmaids may pick up knowledge and knowledge eventually becomes the key to success. People tend to act upon what they know, therefore if they are not aware of things and issues surrounding them they cannot be influenced or encouraged by them and are as a result more easily controlled. The Gilead government even go to such extents of replacing signs with symbols to allow the handmaids to recognise shops. The reason they go so far into restricting handmaids from any form of reading is because, this restricting attitude towards knowledge lets the men set a limit for the handmaids; it is easier to prevent them from having possession of any knowledge at all, then allowing them to have access to even small fragments of knowledge as simple and irrelevant, such as a sign or notice. Therefore to the handmaids it will give them a high satisfaction if they are able to get their hands on such useless knowledge; they will feel as if they are rebelling against the laws of Gilead, whereas in reality this futile idea of rebellion has absolutely no effect on the Gilead regime. On the other hand if they were permitted to read the sign boards then they will consider this access to knowledge to be very limited and seek power over greater information. Atwood therefore tries to use this to show that it is in human nature to always have the urge to rebel against laws. Therefore it can be seen that Gilead is also well aware of this fiery desire to rebel; by banning knowledge which they know that the handmaids desperately crave for, and will indeed attempt to gain access of it; the little that they are able to access however will make no impact. ...read more.

As the novel progresses Offred discovers that she was not the only one who has been offered special treatment, but the handmaid before her was too treated the same. When Offred asks what became of her, the commander tells her that she had hung herself, the commander also tells Offred that he would prefer it if her life becomes bearable to her. Offred feels happy as she realizes that the commander would not want her to perish like the previous handmaid 'Things have changed. I have something on him, now. What I have on him is the possibility of my own death. What I have on him is his guilt. At last.' Pg 198 She therefore knows that she has the power to make a difference to his emotions; she is able to make him feel responsible for her death and cause him guilt and so she feels at ease. Offred now feels content since she too can have a sense of control over the commander, instead of her being controlled by Gilead and others around her. We learn in Chapter 8 that Serena used to campaign against women's rights. This makes her a figure worthy of pity, in a way; she supported the anti-woman principles on which Gilead was founded, but once they were implemented, she found that they affected her as well as other women. She now lives deprived of freedom and saddled with a Handmaid who has sex with her husband. Yet Serena forfeits what pity we might feel for her by her callous, petty behavior toward Offred. Powerless in the world of men, Serena can only take out her frustration on the women under her thumb by making their lives miserable. In many ways, she treats Offred far worse than the Commander does, which suggests that Gilead's oppressive power structure succeeds not just because men created it, but because women like Serena sustain it. ?? ?? ?? ?? 1 ...read more.