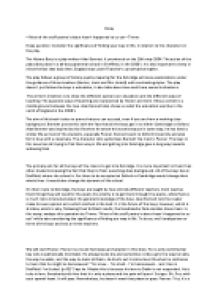 The History Boys. Consider the significance of finding your way in life, in relation to the characters in the play.

ï»¿Essay « Most of the stuff poetry's about hasn't happened to us yet » Timms Essay question: Consider the significance of finding your way in life, in relation to the characters in the play. The History Boys is a play written Alan Bennett. It premiered on the 18th may 2004. The action of the play takes place in a all-boys grammar school in Sheffield, in the 1980's. It’s also important to keep in mind the fact that back then, England was under Thatcher’s conservative regime. The play follows a group of history pupils preparing for the Oxbridge entrance examinations under the guidance of three teachers (Hector, Irwin and Mrs Lintott) with contrasting styles. The play doesn’t just follow the boys is education, it also talks about love and there s****l inclinations. The writer's intention is to show the different opinions on education and the different ways of teaching. The opposite ways of teaching are represented by Hector and Irwin. Missus Lintott is a middle ground between the two. Alan Bennett also shows us what the education was like in the north of England in the 1980's. The aim of this book is also to prove that you can succeed, even if you are from a working class background. Bennett proves this with the fact that all the boys got in to either Cambridge or Oxford. Alan Bennett was inspired by his life when he wrote this novel because in some way, he has lived a similar life as most of the students, especially Posner. ...read more.

He plans it carefully, then executes perfectly. Even Mrs. Lintott says that he is c**t-struck or sly. Instead of being bad or naughty like normal teenagers, he plays something more challenging. We can see it through his “love” story. Even though he has a relationship with Fiona, a school staff, he flirts with Irwin for he thinks that Irwin might be h********l and would like to go out having some drink with him. Drink here is meant to be connotative. He might be a bisexual. And yet, he does that just for fun, just for saying thank to Irwin, and just for answering his curiosity about Irwin’s way of life. Talking about his curiosity, he often raises trapped question that nobody can answer. Yes, he is very charming and smart. But that’s all we know. He is flat since he doesn’t involve us to his psychological aspect. It is interesting to notice that he is much more relaxed and confident with Irwin once he's certain of going to Oxford. When he asks him to do s****l things for example: “(…) what I was really wondering was whether there were any circumstances in which there was any chance of your sucking me off.(p.99)» He is so confident that he feels somewhat superior to Irwin. Especially since he admitted he went to Bristol. As said previously, Dakin went on to be a tax lawyer. We can say that he succeeded in life and that he found his way in life too. ...read more.

Those three teachers will all help the boys in their quest to pass the Oxbridge exams. But finding your way in life isn?t just passing exams and getting a good job as Hector rightly points out:? "And what happens after the exam? Life goes on." Finding your way in life is also finding the right woman or man and knowing more about yourself each day. In my personal opinion, finding your way in life is also going from thinking to living, from theory to practice. So as we have seen, there are a two opposite takes on education but there is a common aim: to protect students against the miseries of life. Each student followed the the vision of education he thought was best. Some students like Dakin preferred Irwin?s philosophy because he thought the professional aspect was more important than the cultural and the ideological aspect which Posner privileged. I guess this play?s message is : ?choose what you like and what you feel is more important. Nowadays, that question is still asked to students, implicitly, when they have to choose which university to go to. The popularity of this message in the play is evident from the fact all the intrigue of the play is based around the question of: Will the boys pass the Oxbridge exams? This shows the importance of finding your way in life but it also reminds students of today?s society how important it is to find the right path. ...read more.

This essay shows a knowledge and understanding of the play but its very logical structure ie. of taking each character separately, limits discussion and exploration to a certain extent. Quotes are appropriate and support statements and there is social and historical context throughout the essay.