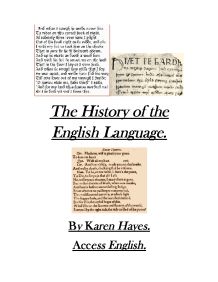 The History of the English Language

The History of the English Language. By Karen Hayes. Access English. The English Language is continually changing. English has evolved from the Old English (500-1100) through Middle English (1100-1500), Early Modern English (500-1700) to the English we use today. Language often changes to make it physically easier to speak. One of the changes that take place is Omission, sounds disappear from words. Shakespeare, for example, would have said "hadst" where we would now say "had". We often shorten words like "telephone" to "phone" and the shortened words become the norm. Another change is called Assimilation, where phonemes are affected by the phoneme next to it. "Sandwich" for example, is pronounced "samwich". The "d" is omitted and the "n" becomes "m" and this makes it easier to pronounce1. We often make changes to the language in order to make it more consistent. We change words and constructions which seem odd or different. Language often alters due to social influence. Attitudes change towards certain words and they drop out of favour. Slang words which are fashionable, enter the language. New inventions and new ideas bring the need for new words. Some language change happens then individual change their speech to sound more sophisticated to attract more social prestige. ...read more.

Old English words were short, direct and forceful. Sentences were looser and the meaning of the sentence was not dependant on the word order. As in Latin, the Old English inflectional system gave" greater freedom of word-order than Modern English" 5 Unlike Modern English, Old English was a language rich in morphological diversity. It had several distinct cases: * Nominative. * Accusative. * Genitive * Dative * Instrumental. Very few remnants of this survive in Modern English. Nouns adjectives and even the definite article were inflected for gender, case and number. "�oere �eode" " (of) the people" is feminine, genitive and singular. "Angle" "Angles" is masculine, accusative and plural. The system of inflections was more elaborate than Modern English yet we still retain some inflections but the form has changed. One common use of inflections today is adding "-s"to make a word plural. Old English regular verbs show past tense by adding the suffix "ede", "od" or "d" similarly to our Modern English "ed". Another similarity is irregular Verbs in Old English also show past tense by changing the root vowel like our modern equivalent "drive"/"drove". Middle English The period of Middle English is hard to define. The Normans invaded in 1066 and their French language impacted on English, but not immediately. ...read more.

Early Modern English still had some unusual word order, Shakespeare's plays contain "-est" "thou" and "-eth". Before this period, we had little or no punctuation or the use of capital letters that we use today. The modern punctuation system emerges during the Renaissance period.11 It was different to the rules we use today. They used the virgule similarly to the modern comma. The period (.) was used as we would use a comma. Inverted commas were introduced to appear like open direct speech. By the end of the Early Modern period, the modern punctuation had developed to what we use today. This period also saw the disappearance of "ye". It developed to the modern "you". The use of "ye" and "thou" became restricted to religious or literacy contexts. The language changed continually over this period. Shakespeare and Chancery are more different to comprehend than literature from the end of the 18th Century. For example Jane Austen's work. We still heard elements of Early Modern English are still heard in some dialects like "thee" and "thou" is still spoken in the Black Country. In 1755, Samuel Johnson produced the first dictionary which standardized spellings and word meanings. Regional differences have lessened due to improved education and literacy. English is constantly changing. Slang words, borrowing from other languages and countries like America enter our language all the time. Today's technology allows us to connect to the world so all languages may influence tomorrow's language. ...read more.