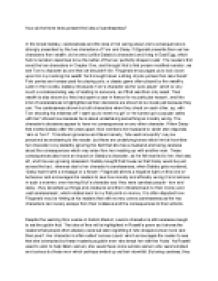 The Idea of Carelessness in &quot;The Great Gatsby&quot;, Rosetti's poems and &quot;The Rime of the Ancient Mariner&quot;.

﻿How do the three texts present the idea of carelessness? In the Great Gatsby, carelessness and the idea of not caring about one?s consequences is strongly presented by the two characters of Tom and Daisy. Fitzgerald presents them as two characters from wealth, old money (unlike Gatsby?s character) and living in East Egg, which Nick?s narration describes to be the better of the two ?perfectly shaped ovals?. The readers first meet the two characters in Chapter One, and through Nick?s first person modified narrator, we see Tom?s character as one that we shouldn?t like. Fitzgerald encourages us to look down upon him by mocking his wealth ?he?d brought down a string of polo ponies from lake forest?. Polo ponies are horses used for playing polo, a classic game often played by the wealthy. Later in the novella, Gatsby introduces Tom?s character as the ?polo player? which is very much a condescending way of relating to someone, as if that was their only asset. ...read more.

It is often disputed how Fitzgerald may be hinting at his readers that with money comes carelessness as the two characters can merely escape from their mistakes and the consequences to their actions. Despite the warning from Jeanie in Goblin Market, Laura?s character is still careless enough to eat the goblin fruit. The idea of free will is highlighted in Rosetti?s poem as it shows the readers that people often disobey rules but later regretting it ?she dropped a tear more rare than pearl?. Her character is often called ?curious Laura? which encourages the reader to see that she is tempted by these mysterious goblin men who tempt her with the ?fruits?. As Rosetti used to work to help fallen women, she would have come across women who were tempted and curious by these men which perhaps ended up as their downfall. By being careless, they could have let men take advantage of them, and Rosetti uses Laura as epitomes of these fallen women to show how careless they were. ...read more.

In The Rime of the Ancient Mariner, the climax of the poem and the ?event? which makes the Mariner ?careless? is when he kills the albatross ?I shot the Albatross?. This may also relate back to the concept of free will that God gave us all, and that ?killeth the pious bird of good omen? for no evident reason. This idea of carelessness, just like in the other two texts, is shown by the actions which one?s carelessness and disregard affects other people. Just like in Moby d**k?s Melville, sailor?s good luck creatures are very precious to them and after killing the Albatross which the mariners loved dearly ?as if it had been a Christian soul?, had dire effects for the rest of the poem. Coleridge uses pathetic fallacy, such as ?the silence of the sea? to show that the Mariner?s actions had consequences upon nature itself. Even the rhythm of the poem alters, and the use of repetition to say the same thing is used ?down dropt the breeze, the sails dropt down? gives the poem a slower pace. ...read more.