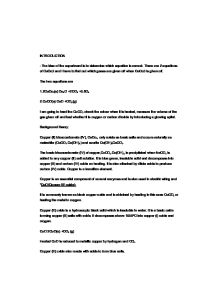 The idea of the experiment is to determine which equation is correct. There are 2 equations of CuCo3 and I have to find out which gases are given off when CuCo3 is given off.

INTRODUCTION : The idea of the experiment is to determine which equation is correct. There are 2 equations of CuCo3 and I have to find out which gases are given off when CuCo3 is given off. The two equations are 1.2CuCo3(s) Cu2O +2CO2 +0.5O2 2.CuCO(s) CuO +CO2(g) I am going to heat the CuCO3 check the colour when it is heated, measure the volume of the gas given off and test whether it is oxygen or carbon dioxide by introducing a glowing splint. Background theory: Copper (ii) trioxocarbonate (IV), CuCo3, only exists as basic salts and occurs naturally as malachite (CuCO3.Cu(OH)2) and azurite Cu(OH)2CuCO3. The basic trioxocarbonate (IV) of copper,CuCO3.Cu(OH)2 is precipitated when NaCO3 is added to any copper (II) salt solution. It is blue green, insoluble solid and decomposes into copper (II) and carbon (IV) oxide on heating. It is also attacked by dilute acids to produce carbon (IV) oxide. Copper is a transition element. Copper is an essential component of several enzymes and is also used in electric wiring and �CuO(Copper (II) oxide): It is commonly known as black copper oxide and is obtained by heating in this case CuCO3 or heating the metal in oxygen. Copper (II) oxide is a hydroscopic black solid which is insoluble in water. It is a basic oxide forming copper (II) salts with acids. It decomposes above 1000�C into copper (I) ...read more.

Ca (OH) 2 +CO2(g) �CaCO3(s) + H2O(l) Variables, which apply. The independent variable is the cupric carbonate (CuCO3). The dependent variables are the oxides and the gases given off. The quantity of CuCO3 was measured with a weighting scale in a weighing bottle. Calculations: Equation 1 2CuCO3(s) �Cu2O(s) + 2CO(g) +0.5O2(g) Equation 2 CuCO3(s) �CuO(s) +CO2(g) 1 mole of gas contains 22.4dm3 Range of quantities measured for equation 2: CuCO3�CuO + CO2(g) 1). 1.5g of CUCO3. No of mol = 1.5\124 =0.012096774mol Mass of CuO produced =76 x0.012096774=0.919354824g of CuO 0.012096774 :0. 012096774mol The Independent variable is the cupric carbonate (CuCO3), which is measured with a weighting balance. The dependent variables are the mass of CuO and the volume of CO2 given off. A gas syringe was used to measure the volume of the CO2 given off while a balance was used to measure the residue copper oxide. To keep the independent variable constant, use the same amount for all your experiments. The same boiling tube should be used all throughout the experiments so that the volume of air in the tube will be the same for all the experiments. Preliminary Study: Equipment: Bunsen burner, cupric carbonate, litmus paper, gas syringe, boiling tube, wire gauze, safety goggles, lab coat, glowing splint, weighting beam, spatula, clamp and stand, rubber tube, tongs. Method: 1. 0.5g of CuCo2 was measured on a weighting scale and put in a boiling tube. ...read more.

I used a gas syringe to measure the volume of gas in the tube to give me a good degree of accuracy. 5. I clamped the boiling tube down with a clamp stand to make it steady so I can read accurately, the volume of gas given off. 6. I heated the boiling tube containing CuCO3 over a Bunsen burner to decompose the CuCO3 and to see what colour it changes to. This will help to determine which equation is correct. 7. After heating the chemical, which turned black. I read off the volume of gas collected. 8. I tested the gas with a glowing splint. The gas is supposed to rekindle the splint but it didn't. 9. I also tested gas with damp litmus paper. . 10. I tried to dissolve the residue by adding water to it. It didn't dissolve which also confirms that the residue is CuO because CuO is insoluble in water. Results 1. The volume of gas collected in the gas syringe is 80cm3.i expected a volume of 90cm3. 2. The copper carbonate turned black after heating. This confirms that CuO is the residue. 3. When I tested the gas with litmus paper. The litmus paper turned pink from blue which confirms that the gas is CO2 4. A glowing splint. The glowing splint didn't re ignite. When I tested the gas with a glowing splint. This shows that the gas isn't oxygen hence not equation 1. ...read more.

There is a lot of information in this assignment. It sometimes could do with organising and subtitling to lead the reader through the different sections, but it's a good and thorough piece of work.

There are things that could be improved,; particularly the use of terminology - anatomy and physiology is full of terms that should be applied.