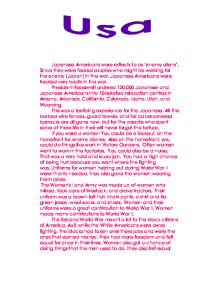 The impact of the Second World War for women was very high. Women had the chance to feel equal again, they felt they could talk their mind and have their say in most things.

Japenese Americans were reflects to as 'enemy aliens'. Since they were feared as spies who might be working for the enemy (Japan) in the war. Japanese Americans were treated very badly in the war. President Roosevelt ordered 120,000 Japanese and Japanese Americans into 10-isolated relocation centres in Arizona, Arkansas, California, Colorado, Idaho, Utah, and Wyoming. This was a terrifying experience for the Japanese, All the barbed wire fences, guard towers, and tar paper-covered barracks are all gone now, but for the people who spent some of there life in their will never forget the torture. If you were a women You could be a lookout on the homefront for enemy planes. ...read more.

Their uniform was a brown felt hat, khaki pants, a shirt and tie, green jersey, wool socks, and shoes. Women and their uniforms were a great contribution to World War II. Women made many contributions to World War II. The Second World War meant a lot to the black citizens of America, As it while the White Americans were away fighting, the blacks had taken over there jobs and were the ones that earned money, they had more freedom and felt equal for once in their lives. Women also got a chance of doing things that the men used to do, they also felt equal and that they had freedom. ...read more.

Women would get quite a few long term benefits from World War 2, like, Permently improved their status, learned new skills, Encouraged to work with adverts and Women also made a point by working in the factories. There were a few settbacks for women though, For example, some men complained, blacks got the lower paid jobs, men wanted the women back at home when the war ended and many women lost their lives through factory working etc. Women felt free, they felt they had the chance to be someone they never imagined they could be, they were acting like men, doing the things that men did, they felt they had something to be proud of, overall the second world war brought ups and downs into the Japanese and Women's lives. ...read more.