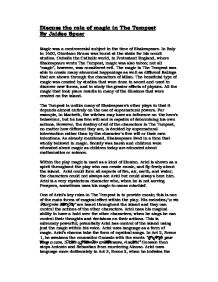 The Importance of Magic in The Tempest

Discuss the role of magic in The Tempest By Jaidee Spear Magic was a controversial subject in the time of Shakespeare. In Italy in 1600, Giordano Bruno was burnt at the stake for his occult studies. Outside the Catholic world, in Protestant England, where Shakespeare wrote The Tempest, magic was also taboo; not all "magic", however, was considered evil. The magic in The Tempest was able to create many abnormal happenings as well as different feelings that are shown through the characters of Milan. The beneficial type of magic was created by studies that were done in secret and used to discover new forces, and to study the greater effects of physics. All the magic that took place results in many of the illusions that were created on the island. The Tempest is unlike many of Shakespeare's other plays in that it depends almost entirely on the use of supernatural powers. For example, in Macbeth, the witches may have an influence on the hero's behaviour, but he has free will and is capable of determining his own actions. ...read more.

The power of these words is enough to derail the seditious plot. In this scene, the audience also discovers that the source of Prospero's power is his books. Later, Ariel visits Alonso and Gonzalo as a Harpy. When they draw their swords to defend themselves, he says, "Your swords are now too massy for your strengths / And will not be uplifted." Shakespeare draws a distinction between good magic and bad magic, by using the characters Prospero and Sycorax. Sycorax is said to have worshipped the devil and been full of "earthly and abhorred commands". She was unable to control Ariel, who was "too delicate" for such dark tasks. Prospero's rational goodness enables him to control Ariel where Sycorax can only trap him in a tree. Sycorax's magic is frequently described as destructive and terrible, where Prospero's is said to be wondrous and beautiful. Prospero seeks to set things right in his world through his magic, and once that is done, he renounces it, setting Ariel free. Prospero is by far the most authoritative character in the play as he controls the fate of all other characters by using his magical powers, 'If thou more murmur'st, I will rend an oak and peg thee in its knotty entrails.' ...read more.

In this case, Prospero holds power over other characters onstage because of his mastery over language. Only Caliban dares to challenge Prospero's rule, but his lone voice of dissent is ineffective; as he confesses, the only benefit he has gained from learning language is that he "knows how to curse." In conclusion, magic is potentially the most significant and influential theme within The Tempest and the whole play centres around this idea. Without the power of magic Prospero would have been unable to create the tempest and the characters would not have even got to the island. The character of Ariel is a spirit which is essentially created by magic, and the ideas of good and evil, which is also a key theme, also centre around magical power. Without the power of magic Ariel would never have been freed from the tree, and Prospero would never have been able to bring the characters together, which consequently means that Miranda and Ferdinand would never have met and fallen in love. The Tempest is very different to Shakespeare's other plays and the theme of magic is the foundation on which the play is based. ...read more.