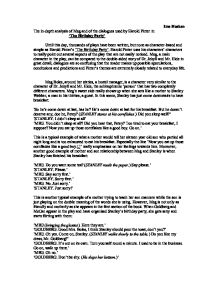 The in-depth analysis of Meg and of the dialogues used by Harold Pinter in 'The Birthday Party'.

Ime Husken The in-depth analysis of Meg and of the dialogues used by Harold Pinter in 'The Birthday Party' Until this day, thousands of plays have been written, but none as character-based and simple as Harold Pinter's 'The Birthday Party'. Harold Pinter uses his characters' characters to really point out several aspects of the play that are not easily noticed. Meg, a main character in the play, can be compared to the double-sided story of Dr. Jekyll and Mr. Hide in great detail, dialogues are so confusing that the reader makes up possible speculations, conclusions and predictions and Pinter's themes are extremely closely related to everyday life. Meg Boles, around her sixties, a hostel manager, is a character very similar to the character of Dr. Jekyll and Mr. Hide, the schizophrenic 'person' that has two completely different characters. Meg's sweet side really shows up when she acts like a mother to Stanley Webber, a man in his thirties, a guest. In this scene, Stanley has just come downstairs to have breakfast: 'So he's come down at last, has he? ...read more.

'MEG. Oh no.' 'GOLDBERG. Don't be shy. (He slaps her bottom.)' 'MEG. Oooh!' In this part of the scene, it is very obvious that Goldberg and Meg are flirting. She is fishing for compliments from everyone, especially from Goldberg and when he 'slaps her bottom[,]' she replies with 'Oooh!' in such a way that she lets him know that she really enjoyed that. This way it's going back and forth between Meg and Goldberg. In short, Meg has a definite two-sided personality; the tender, loving mother and the sexy flirty seducer. Furthermore, the dialogues spoken in Pinter's play are very extraordinary. On the one side, they are very childish: 'MCCANN (to STANLEY). Sit down.' / 'STANLEY. Why?' / 'MCCAN. You'd be more comfortable.' / 'STANLEY. So would you.' These are the kind of sentences and conversations primary school children would have with each other. On the other hand, however, some dialogues are so extremely confusing that we no longer have any idea what they are on about. In this scene, Goldberg and McCan are interrogating Stanley: 'GOLDBERG. ...read more.

A big theme here is people use big words to intimidate others. Many people are seriously faced by this problem and can not defend themselves from situations like above. Another big theme in the book is the fact they Meg has two very different sides. This leads to a broader theme, including nearly (if not) all the play's characters, nothing is what it actually seems. Another big theme in the play is that man can not avoid fights. You can never be sure of what's coming at you next, and for all you know, it's someone looking for fights... In conclusion, looking at Meg's double-sided character, Pinter's way of writing dialogues which nobody but himself understands and the main themes of the book, it can be said that Pinter has written a play which can be very closely compared to normal every day life. People don't appear what they seem (Meg), people use big words to intimidate others (Goldberg + McCan) and the fact that man is not able to avoid fights all sum up to one statement: Harold Pinter's play 'The Birthday Party' is based on real life situations and can not but be called one of the realest plays of modern times. ...read more.