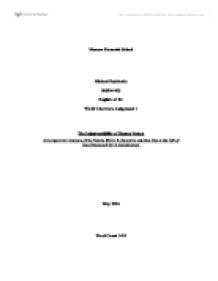 The Indestructibility of Human NatureA Comparative Analysis of the Novels We by E. Zamyatin and One Day in the Life of Ivan Denisovich by A. Solzhenitsyn

The purpose of Zamyatin assigned number names in We was to show the society's attempt at creating total equality. However, the use of number names gives the reader a strange feeling, and creates a parallel to prison life which is an obvious indicator of something wrong in the utopia. Do number names work to destroy individuality, personality and identity in the created societies of these novels? In both systems all the 'inmates' have number names and there are strict rules on their use. In One Day in the Life of Ivan Denisovich the inmates had a well developed practice of keeping the number visible but not too bright, as shown in the following passage: "They spelled nothing but trouble, those numbers: if they were distinct the guards could identify you from any distance, but if you neglect to have them repainted in time you'd be sure to land in the lock up for not taking care of your number."1 However, number names in One Day in the Life of Ivan Denisovich are a form of address used only by the authorities, while the inmates, unofficially, do not use number names while communicating amongst themselves. There are also distinctions in how characters address each other depending on their status and their level of respect. For example Ivan Denisovich is never addressed in any way other than by his first name followed by his patronymic which in the ...read more.

As visible from these examples the attempt to rid the characters of thier personal identity and individuality by assigning number names was not successful. Ironically the randomly assigned names managed, nevertheless, to reflect the personalities of the characters thus underlining the theme of the indestructibility of human nature. Another method used by both authors in order to convey the same idea was the actual explanation and chronology of the events. While each author used somewhat different techniques a similar ultimate effect was achieved. In We the development of D-503's humanity is closely followed by the reader; whereas, there is something mysterious and unknown about Ivan Denisovich, his past and his feelings. In We the gradual change of D-503's character is described, he goes through an 'evolution' in which his thoughts and opinions change drastically between the beginning, middle and end of the novel. Solzhenitsyn on the other hand makes it clear that Ivan Denisovich is not in development, but instead shows how he retains his initial dignity and pride in a setting created to destroy them throughout the novel. These novels both present the theme of Human Nature and how it will never be defeated by any institution no matter how 'good' or 'bad' it may be, the difference being that while one shows the process of it coming to existence by escaping and overcoming oppression, the other shows how if retained it can never be broken. ...read more.