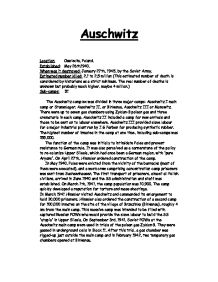 The infamous gateway of the entrance to Auschwitz.

Auschwitz Location: Oswiecim, Poland. Established: May 26th1940. When was it destroyed: January 27th, 1945, by the Soviet Army. Estimated number killed: 2,1 to 2,5 million (This estimated number of death is considered by historians as a strict minimum. The real number of deaths is unknown but probably much higher, maybe 4 million.) Sub-camps: 51 The Auschwitz complex was divided in three major camps: Auschwitz I main camp or Stammlager; Auschwitz II, or Birkenau, Auschwitz III or Monowitz. There were up to seven gas chambers using Zyklon-B poison gas and three crematoria in each camp. Auschwitz II included a camp for new arrivals and those to be sent on to labour elsewhere. Auschwitz III provided slave labour for a major industrial plant run by I G Farben for producing synthetic rubber. ...read more.

In March 1941 Himmler visited Auschwitz and commanded its enlargement to hold 30,000 prisoners. Himmler also ordered the construction of a second camp for 100,000 inmates on the site of the village of Brzezinka (Birkenau), roughly 4 km from the main camp. This massive camp was intended to be filled with captured Russian POWs who would provide the slave labour to build the SS 'utopia' in Upper Silesia. On September 3rd, 1941, Soviet POWs at the Auschwitz main camp were used in trials of the poison gas Zyklon-B. They were gassed in underground cells in Block 11. After this trial, a gas chamber was rigged-up just outside the main camp and in February 1942, two temporary gas chambers opened at Birkenau. ...read more.

See picture underneath. The infamous gateway of the entrance to Auschwitz In November Himmler ordered gassings to stop, and a 'cleanup' operation was inaugurated to conceal traces of the mass murder. In January 1945, the Germans evacuated 58,000 prisoners who could walk. They left behind around7,000 sick or incapacitated people who they did not expect would live for long. When Soviet troops attacked Auschwitz on January 27, 1945, they found these pitiful survivors as well as 836,525 items of women clothing, 348,820 items of men clothing, 43,525 pairs of shoes and vast numbers of toothbrushes, glasses and other personal effects. They found also 460 artificial limbs and seven tons of human hair shaved from Jews before they were murdered. ...read more.