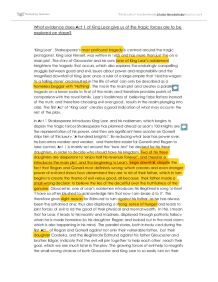 What evidence does Act 1 of King Lear give us of the tragic forces are to be explored on stage? 'King Lear', Shakespeare's most profound tragedy is centred around the tragic protagonist, King Lear himself, was written in 1605 and has more than just the one main plot. The story of Gloucester and his sons (one of King Lear's noblemen) heightens the tragedy that occurs, which also explores the enduringly compelling struggle between good and evil, issues about power and responsibility and the magnified downfall of King Lear; once a ruler of a large empire that 'tied his wagon to a falling stone' and resulted in the life of what can only be described as a homeless beggar with 'Nothing'. The main the main plot and creates a parallel tragedy on a lower scale to that of the main, and therefore provides points of comparison with the royal family. Lear's foolishness of believing false flattery instead of the truth, and therefore choosing evil over good, results in the realm plunging into crisis. The first Act of 'King Lear' creates a good indication of what may occur in the rest of the play. In Act 1 Shakespeare introduces King Lear and his noblemen, which begins to display the tragic forces Shakespeare has planned ahead as Lear's 100 knights are the representation of his power, and they are significant here as later on Goneril strips him of this luxury 'A hundred knights!'. ...read more.

It is also very ironic that, when asked 'Give that portion which yourself propos'd' by Burgundy for the grant so as he will marry Cordelia, King Lear refuses 'Nothing, I have sworn, I am firm', showing that he would rather have his daughter not taken care of by someone than to give away the money he once promised; he sees the materialistic money as controllable and as power, whereas he would happily strew his daughter aside as he does not consider her easily controllable. This shows that although he is wishing to give away some of his responsibilities to his daughters, he still wants to have control and power, which will later cause him trouble as inevitably, his daughters Goneril and Regan will attempt to strip him of all; showing that his small mistake of placing his kingdom in the wrong hands has lead him down the wrong path, and will lead to many more happenings similar to this. Kent is the most loyal nobleman to Lear, as well as one of the strongest characters - 'old man', and tries to defend Lear wherever possible, yet the 'recreant' is 'banish'd' by King Lear, once again proving his blindness to the good that are trying to help him. Kent's character presents a strong contrast to the ways of Lear, and helps to point out to the audience how badly King Lear's mistakes are, and the fate that will be. ...read more.

A much more impartial part, yet one most vital to the play in order to create a contrast and intensify King Lear's madness due to his ignorance of good advice, is the Fool. Sometimes through proleptic irony and other through song, the Fool identifies the flaws in Lear's plans, and helps to give stage directions to the audience so as to help create a good base for more tragic forces to be expressed, whilst at the same time cheekily making a joke out of Lear, which also helps the audience to identify just how ignorant and oblivious to his actions King Lear really is. Lear's naivety helps to intensify his actions and the tragedy that is clearly waiting for him, just as a little boy with the 'titles...that thou wast born with' does not recognise the consequences of his actions. In Act 1 Scene IV we see the Fool make a mockery of Lear whilst singing 'For wise men are grown foppish/ And know not how their wits to wear...' Shakespeare's 'King Lear' is a complex but tragic story, which intensifies the mistakes and troubles Lear encounters due to his asininity through the contrasting characters surrounding him and the parallel tragedy regarding Gloucester and Edmund. In this, I feel that the first Act begins a lot of the tragedy and introduces most of the tragic forces with we later see throughout the play. ?? ?? ?? ?? Jodie Bradshaw ...read more.

This essay has some valid points to make in answer to the question posed in the title.
However, its effectiveness is reduced by over-lengthy paragraphs and meandering sentence structure, combined with a defective quotation technique. This demonstrates the importance of paying attention to style, grammar and sentence construction as well as content in essay writing.
**