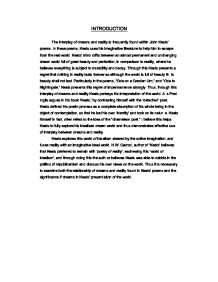 The interplay of dreams and reality is frequently found within John Keats' poems.

INTRODUCTION The interplay of dreams and reality is frequently found within John Keats' poems. In these poems, Keats uses his imaginative literature to help him to escape from the real world. Keats' mind drifts between an almost permanent and unchanging dream world full of great beauty and perfection, in comparison to reality, where he believes everything is subject to mutability and decay. Through this Keats presents a regret that nothing in reality lasts forever as although the world is full of beauty this beauty shall not last. Particularly in the poems, "Ode on a Grecian Urn," and "Ode to Nightingale," Keats presents this regret of impermanence strongly. Thus, through this interplay of dreams and reality Keats portrays his interpretation of the world. As Fred Inglis argues in his book 'Keats,' by contrasting himself with the 'detached' poet, Keats defined his poetic process as a complete absorption of his whole being in the object of contemplation, so that he lost his own 'identity' and took on its nature. Keats himself in fact, often refers to the idea of the "chameleon poet." I believe this helps Keats to fully explore his idealised dream world and thus demonstrates effective use of interplay between dreams and reality. Keats explores this world of idealism steered by the active imagination, and fuses reality with an imaginative ideal world. H.W. Garrod, author of 'Keats' believes that Keats preferred to remain with 'poetry of reality', eschewing this 'world of idealism', and through doing this the author believes Keats was able to dabble in the politics of republicanism and discuss his own views on the world. Thus it is necessary to examine both the relationship of dreams and reality found in Keats' poems and the significance if dreams in Keats' presentation of the world. CHAPTER ONE 'ODE TO A NIGHTINGALE' Firstly, it is necessary to study the interplay between dreams and reality in the poem 'Ode to a Nightingale,' by Keats. ...read more.

Unheard melodies, then, containing as they do, infinite possibilities of melody, must be sweeter than any number of heard melodies, which after all, are merely transient and inevitably flawed. I believe this shows that the urn, like the "unheard melodies", is represented to us as a type of Platonic pure form, existing outside the time, communicating extravagant sound and motion while itself remaining silent and still. In addition, the figures in the dream world of the urn, beauty and perfection last forever unlike reality: "Bold lover, never, never canst thou kiss... She cannot fade, though thou hast not thy bliss / For ever wilt thou love, and she be fair!" This however, I feel, also shows us that the perfect and immortal beauty which the figures on the urn enjoy has been achieved at the sacrifice of sensual experience; the pleasure of the lovers, always just about to kiss, is offset by their inability to complete the act. In the third stanza Keats has escaped himself and entered and bonded with the life of the urn. This stanza of the poem continues the development of this contrast between immortality and the dream world of the urn in contrast to reality and the human experience. The word "happy" is repeated several times. I believe Keats cannot put this great happiness into words, happiness is an almost exalted mystical state. Unlike anything in the world, the urn is both vital and timeless. However, as in 'Ode to a Nightingale' the poet returns to the unpleasant realities of the human world: "That leaves a heart high-sorrowful and cloy'd / A burning forehead, and a parching tongue." In the last stanza the urn is now portrayed as an "Attic shape! Fair attitude! With brede(embroidery)" It is no longer a living thing, it is now an object, a shape. The poet has "withdrawn" from his imaginative dream world back to reality. ...read more.

On a fairly simple level, sleep here is to rest; it is ease and escape, refreshing the mind and body, and offering relief from the hard realities of daily life. Thus I believe this again demonstrates Keats desire to enter a dream world and escape from reality. This is shown when Keats conveys poetry as offering relief from the ever-present consciousness and is therefore "higher beyond thought." Keats shows that sleep is also important for the creative mind; it is "the silence when some rhymes are coming out." In my opinion, the poet believes that a state of calm such as sleep is an essential state of mind if the imagination is to function at its best. Furthermore, Keats portrays sleep as an escape from emotional turmoil, not just from s****l yearnings but also from the conscience, change, uncertainty and politics, which are all present in reality. Again, Keats focuses on the harsh realities of our mortal world which he desires to escape from, sleep enables him to do so. In the sense of a "higher consciousness" sleep is portrayed as another metaphor of the imagination. Keats describes linking the imagination with sleep. I think that this is created through dreams. Keats tries to describe his view of the imagination: "All imaginings will hover/ Round my fire-side, and haply there discover Vistas of solemn beauty..." I think that this means, for Keats the imagination is similar to dreaming and is thus beyond his control, and hence "we must ever wonder how." Perhaps here, Keats is trying to suggest that there is mystery surrounding poetic creativity. Yet, at the same time, it works a mysterious creativity deep in the unconscious. It is something that must be allowed space and tranquillity to "meander." As in 'Ode on a Grecian Urn' and 'Ode to a Nightingale' dreams are synonymous with profound insights made possible by the imagination, usually through changing reality. I think that Keats uses dreams both as a great means of escaping harsh reality and as a way of switching off the rational mind. ...read more.