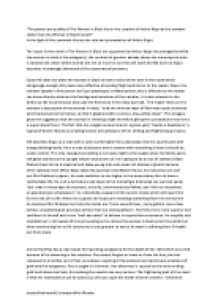 The issues in the novel in The Woman in Black are supported by Arthur Kipps the protagonist whilst the woman in black is the antagonist, the contrast of genders already shows

﻿?The power and quality of The Woman in Black lies in the creation of Arthur Kipps as the narrator rather than the Woman in Black herself.? In the light of this comment discuss the role and presentation of Arthur Kipps. The issues in the novel in The Woman in Black are supported by Arthur Kipps the protagonist whilst the woman in black is the antagonist, the contrast of genders already shows the stereotypical man is rational and clever whilst woman are not so much so but this will clash and fall down as Kipps becomes increasingly distressed of the supernatural presence. Susan Hill does not allow the woman in black to have a voice of her own in the novel which intriguingly enough still proves very effective at sending fright and horror to the reader. Kipps, the narrator speaks in first person as if just speaking to a fellow person; this is effective as the reader can know directly what are the feelings and emotions of the narrator, it is also relevant to the Gothic as the novel Dracula also uses the first tense in the diary journals. ...read more.

He is of a dull nature and does not let himself get distracted nor worried easily, ?but I was in those days of my youth, a sturdy, commonsensical fellow, and I felt no uneasiness or apprehension whatsoever?, he is blissfully unaware of the secrets inside which will haunt him for the rest of his life. When he suspects the locals are revealing something from him every time he mentions Mrs Drablow he thinks the locals are ?more superstitious, more gullible, more slow witted, unsophisticated and slow-witted, than we cosmopolitans?, He thinks he is more superior and confident in himself and is too ?well-educated? to believe in superstitious nonsense. He stupidly acts snobbish but is still aware of his surrounding as he notices the woman in black enter the parish but when mentioning her to Mr Jerome he is too ignorant to notice he wasn?t suffering from ill health but from shock. Jennet Humfrye has a real reason for haunting; vengeance for the death of her child which occurred because of his drowning in the marshes. She cannot forgive or move on from the loss; she has remained in a terrible sort of hell, an endless recycling of the accident and continuous emotions of grief and the vengeance. ...read more.

The actual novel is a tragedy and terrifying 10. Writing novel as an act of catharsis 11. He is the only one to challenge her, Kipps is before Jerome after 12. Morale purpose in story struggle between deeper understanding that good does not necessarily overcome evil especially when Kipps wife and son are killed 13. Kipps grows and changes emotionally and mentally when second time of witnessing wib and in nursery, he felt feelings he couldn?t explain, doubts his stubbornness the day he enters eel marsh house ?I did not believe in ghosts. Or rather, until this day, I had not done so, and whatever stores I had heard?? 14. In the Woman in Black we the readers became aware of the novel?s issues as we read about the character?s growth and changes. We understand the book more because we understand in a deeper way about the challenges the characters went through in the book. The Woman in Black helps us understand the good and bad points in life and although we have been taught that good always triumphs over evil but as we have read in this book it is not always right. In this book we also saw what hate and the need for revenge does to a person. Jessica RobinsonAS LiteratureMrs Wooler ...read more.