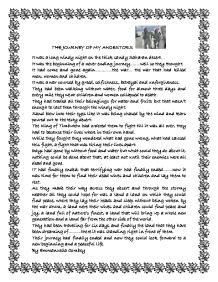 THE JOURNEY OF MY ANCESTORS It was a long windy night on the thick sandy Saharan desert. .It was the beginning of a never ending journey........well so they thought

THE JOURNEY OF MY ANCESTORS It was a long windy night on the thick sandy Saharan desert. . It was the beginning of a never ending journey........well so they thought. It had come and gone again.............the war... the war that had killed men, women and children. It was a war coursed by greed, selfishness, betrayal and unforgiveness. They had been walking without water, food for almost three days and every mile they went children and women collapsed to death. ...read more.

The King of Timbuktu had ordered them to fight till it was all over, they had to because their lives where in their own hand. While they fought they wondered what had gone wrong, what had caused this fight, a fight that was tiring their lives apart. Days had gone by without food and water but what could they do about it, nothing could be done about that, at least not until their enemies were all dead and gone. ...read more.

were their wives and children could find peace and joy, a land full of nature's finest, a land that will bring up a whole new generation and a land far from the other side of the world. They had been traveling for six days and finally the land that they have been dreaming of..........there it was standing right in front of them Their journey had finally ended and now they could look forward to a new beginning and a peaceful life. By Emmanuella Combey ...read more.