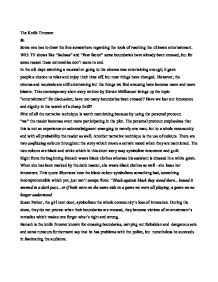 The Knife Thrower B: Some one has to draw the line somewhere regarding the tools of reaching the ultimate entertainment. With TV shows like "Jackass" and "Fear factor" some boundaries have already been crossed, but for some reason these extremities don't seem to end. In the old days watching a musical or going to the cinema was entertaining enough; it gave people a chance to relax and enjoy their time off, but now things have changed. However, the cinema and musicals are still entertaining but the things we find amusing have become more and more bizarre. This contemporary short story written by Steven Millhauser brings up the topic "entertainment" for discussion; have too many boundaries been crossed? Have we lost our innocence and dignity in the search of a cheap thrill? First of all the narrative technique is worth mentioning because by using the personal pronoun "we" the reader becomes even more participating in the plot. ...read more.

Susan Parker, the girl next door, symbolizes the whole community's loss of innocence. During the show, they do not protest when their boundaries are crossed, they become victims of entertainment's tentacles which makes one forget what's right and wrong. Hensch is the knife thrower known for crossing boundaries, carrying out forbidden and dangerous acts and some rumours furthermore say that he has problems with the police, but nonetheless he succeeds in fascinating the audience. Hensch is described as a mysterious man with black hair and black clothes who performs his show with arrogance and indifference towards the audience. He shows no signs of emotions and he does not bow until the end of the show where he has definitely crossed the line; where he presumably kills Laura. It is difficult to relate to Hensch because he is described as a mysterious man. Millhauser's decision about making him almost anonymous gives the impression that his daring acts are not caused by some traumatic incident in his own life, but simply because any entertainer has the right to improve his art, or does he? ...read more.

"The knife struck beside her neck...had he missed? - and we felt a sharp tug of disappointment, which changed at once to deep shame, for we hadn't come out for blood, only for - well, something else...". It is obvious that the audience is confused, as if they don't recognize their own feelings any more. On the last page when they leave the theatre their remorse come through. They tell themselves that Laura had probably left the theatre smiling and alive. But there is some sort of doubt in their minds, and to cover this doubt they try to understand and justify Hensch's actions which this quotation illustrates: "In any case we reminded ourselves that she hadn't been coerced in any way". They aren't completely blind. Fortunately, human beings are still wise enough to understand that if we appreciate this sort of entertainment then what could we expect in the future? ...read more.