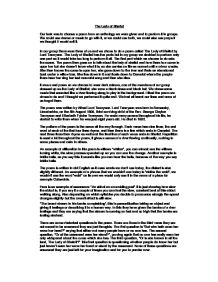 The Lady of Shallot - Our task was to choose a poem from an anthology we were given and to perform it in groups. We could use drama or music to go with it, or we could use both, we could also use props if we thought it would suit it.

The Lady of Shallot Our task was to choose a poem from an anthology we were given and to perform it in groups. We could use drama or music to go with it, or we could use both, we could also use props if we thought it would suit it. In our group there were three of us and we chose to do a poem called The Lady of Shallot by Lord Tennyson. The Lady of Shallot has five parts but in my group we decided to perform only one part as it would take too long to perform it all. The first part which we choose to do sets the scene. The poem then goes on to talk about the lady of shallot and how there is a curse is upon her but she doesn't know what it is, so she carries on life as normal until a mirror cracks. She then knows the curse is upon her, she goes down to the river and finds an abandoned boat under a willow tree. ...read more.

The next three lines then rhyme as well and the final line of each verse ends in Shallot. Repetition is used a lot throughout the poem, it gives a sense of a river flowing continually, rushing in some places and calm in others. An example of alliteration in this poem is willows "whiten", you can almost see the willows turning white, the slow process speeded up so you can see the change. Another example is bridle bells, as you say this it sounds like you can hear the bells, because of the way you say bridle bells. The poem is written in old English as it uses words we don't use today, the dialect is also slightly different. An example of a phrase that we wouldn't use today is "clothe the wold", we wouldn't use the word "wold" on its own we would only use it in the name of a place for example Cotswolds. Here is an example of assonance "An abbot on an ambling pad". It is just showing how slow the abbot is, if you say it a couple of times you can feel the slow, constant beat of this abbot walking along. ...read more.

None of these questions are answered they are just left for your imagination and for you to ponder over. This could be a metaphor, "And her eyes were darken'd wholly", making you feel as though they are very dark and that you could look into them and remain looking into them forever as they are never ending, also very strong and noticeable. When you read the poem there are lines which continue on and you have to read it with a flowing effect, so people can feel the river flowing when they hear it. With the stress pattern you have to stress the first syllable strongly and the next not so strongly and then the next strong and it repeats this pattern every time you start a new line unless it is a sentence that is being continued. I enjoyed reading the poem and I also enjoyed performing it. Tennyson is a strong poet who always writes well and his poems have meaning as well as a good rhythm. The way he uses his words conjure up pictures and some of the alliteration and assonance he uses gives the poem feeling. I would definitely read other poems that he has written, and recommend others read them too. ...read more.