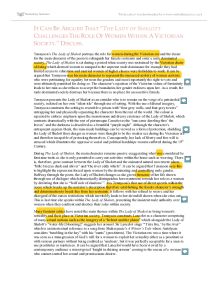 The Lady Of Shalott Feminist Reading

IT CAN BE ARGUED THAT "THE LADY OF SHALOTT CHALLENGES THE ROLE OF WOMEN WITHIN A VICTORIAN SOCIETY." DISCUSS. Tennyson's The Lady of Shalott portrays the role for women during the Victorian era and the desire for the main character of the poem to relinquish her female restraints and enter a male dominated society. The Lady of Shalott is set during a period when society was restrained by the Victorian chain-of-being which deemed women to unequal to the supreme male dominance for example they had limited access to education and married women of higher classes were forbidden to work. It can be argued that Tennyson uses his main character to represent the increased activity of women activists who were petitioning for equality between the genders and most importantly the right to vote and were ultimately punished for doing so. The character's rejection of the Victorian values of femininity leads to her ruin as she refuses to accept the boundaries her gender enforces upon her. As a result, the male dominated society destroys her because there is no place for an assertive female. Tennyson presents the Lady of Shalott as an outsider who is to remain on the verge of a patriarchal society, isolated on her own "silent isle" through use of setting. ...read more.

Many feminist critics have noted the main themes within The Lady of Shalott as being women's sexuality and their place in Victorian society. Tennyson constructs Lancelot as a character comprising of many s****l notions such as the imagery of a "helmet and the plume" which alongside the Lady of Shalott's "water-lily [blooming]" suggests her arousal. Sir Lancelot sings "'Tirra lira,' by the river" which is an intertextual reference to a song from Shakespeare's A Winter's Tale where Autolycus considers "tumbling in the hay" with his "aunts" (prostitutes). The Victorian era was a time where it was seen as a transgression of God's will for a woman to exploit her sexuality either as a prostitute or with various partners without being credited as 'unclean', but it was perfectly acceptable for a man to use prostitutes or mistresses. It can be argued that Lancelot would have been viewed by a contemporary audience a stereotypical 'knight in shining armour' coming to the rescue of a woman who cannot control her s****l and promiscuous desires. Tennyson describes the character "bold Sir Lancelot" as a typical knight with "coal-black curls" and a "broad clear brow" so that Camelot is presented as an archetypal Arthurian city with a male dominated presence. It is believed by many critics that the male character adopts the stereotypical qualities of a man in a medieval context and therefore reduces the Lady of Shalott's status to the 'damsel in distress'. ...read more.

The female character relinquishes herself from her role as a female and as a result suffers a punishment as "singing in her song she died." It is only through death that she is truly recognized for her "lovely face" and gain recognition of being a women and individual. Lancelot is oblivious of the effect he has had upon the Lady of Shalott which can be viewed as the double standards of both men and women during the Victorian period. The female character's s****l exploitation is contradictory to the idealized role of women in a Victorian society and they are supposedly passive, therefore she is punished and ultimately dies. Despite this, Tennyson reprimands this notion through his use of description as the Lady of Shalott remains "robed in snowy white" which symbolizes her innocence and purity. In conclusion, it is evident that within the poem The Lady of Shalott, Tennyson includes many archetypes of women and men within Victorian (and medieval) society. He analyses closely the idea of a woman being the weaker s*x and the notion of the man as the protecting and righteous gender. The poem can be interpreted by feminist critics as an example of typical Victorian views towards women and their rights. Due to Tennyson's focus upon nature during a time of industrialization the Lady of Shallot appears as a caricature of how women were previously treated, therefore, suggesting a change in attitudes. ?? ?? ?? ?? ...read more.

There is the outline of a plausible feminist critique of the poem here, but the writer has not convincingly used textual detail to support this reading, and tends to make grand claims on the basis of insufficient evidence.
The essay also seems to suggest that Tennyson fully intended his poem to be an examination of male dominance and female oppression. The notion of authorial 'intent' is a problematic one. No-one can know what an author intends, unless a written statement of intent survives, and the nature of poetry is that it is often open to different interpretations.
A more tentative approach is recommended, which explores a feminist critique while recognising possible alternatives.
***