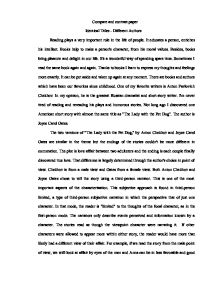 The lady with a pet dog

Compare and contrast paper Identical Titles - Different Authors Reading plays a very important role in the life of people. It educates a person, enriches his intellect. Books help to make a person's character, from his moral values. Besides, books bring pleasure and delight in our life. It's a wonderful way of spending spare time. Sometimes I read the same book again and again. Thanks to books I learn to express my thoughts and feelings more exactly. It can be put aside and taken up again at any moment. There are books and authors which have been our favorites since childhood. One of my favorite writers is Anton Pavlovich Chekhov. In my opinion, he is the greatest Russian dramatist and short-story writer. I'm never tired of reading and rereading his plays and humorous stories. Not long ago I discovered one American short story with almost the same title as "The Lady with the Pet Dog". The author is Joyce Carol Oates. The two versions of "The Lady with the Pet Dog," by Anton Chekhov and Joyce Carol Oates are similar in the theme but the endings of the stories couldn't be more different in connotation. ...read more.

She was known only as the lady with the pet dog. Finally he was given the chance to approach her in a public garden. Slowly the affair progressed to intimacy and they fell in love. Anna had to return home to her husband. After Anna left, Dimitry could not deny his love for her. He went to Moscow to try and ease the loneliness he felt for her. They began to have an affair again not sure of what would come next. Joyce Carol Oates is an American writer who was raised in upstate New York. Also she is a writer who likes to write from a realistic point of view. In 1972 Oates revised the short story "The Lady with the Pet Dog" making it American and more modern. The dialogue is simpler. Also the time in which the story takes place is different. Unlike original version by Chekhov, Oates writes from the woman's perspective. She tells what Anna thinking and what she felt. Little is told of what the lover thinks and his life with his children. In Oates version the story starts off with the affair already in existence. The lover is never given a name and Anna is never given a last name. ...read more.

She resents her lover and herself for being married to one man and loving another. He is sure of his love for Anna and is ready and willing to marry her. She refuses and decides to take her life to end the unhappiness and pain in her life. All of a sudden she gains a certain sense of thankfulness and gratitude. She is grateful to have him in her life no matter what will be the end of this affair. I am unsure if they decided to get married or just continue the affair. In the original they decide to continue the affair but both are unsure of what they are going to do. I like Chekhov's story because Anna is a pretty lady with dignity and proud. Anna in Oates story is not a strong woman. She talks about suicide and murder. It seems that it's not the same woman we knew from Chekhov story. I did not like Oates story because she makes Anna look like simple women with out respect for her, a woman insane with love. Chekhov tells his story from eyes of a man looking at a beautiful woman. It is a very interesting how authors describe affairs and being unfaithful with different point of views. ...read more.