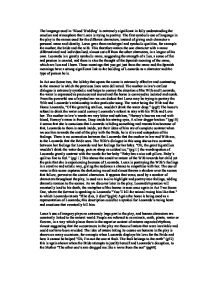 The language used in 'Blood Wedding'

The language used in 'Blood Wedding' is extremely significant in fully understanding the emotion and atmosphere that Lorca is trying to portray. The first symbolic use of language in the play is the names used for the different characters, instead of giving each character a personal name and identity, Lorca gave them archetypal and symbolic qualities, for example the mother, the bride and the wife. This therefore makes the one character with a name differentiated and individualised, almost cut off from the other characters, in a league of his own. Leonardo is a greatly symbolic name, suggesting the strength of a lion, a sense of fire and passion is created, and there is also the thought of the Spanish meaning of the name, which are lion and I burn. These meanings that you get just from the name and the Spanish meanings have a strong significant link to the building of Leonardo as a character and the type of person he is. In Act one Scene two, the lullaby that opens the scene is extremely effective and contrasting to the manner in which the previous lines were delivered. ...read more.

People are referred to as animals, earth, plants, water or flowers, in a way which places them in the superior context of natures expected rhythms, almost suggesting that the occurrences in the play are those of nature that were inevitable and could not have been avoided. The idea of nature taking its course on humans in the play is shown on many occasions, for example when Leonardo displays his love for the Bride and how it cannot be helped "Oh, I'm not the one at fault. The fault belongs to the earth" (g52) this is again shown when the Bride attempts to justify herself and Leonardo's deception, to the Mother "The other one's arm dragged me like a wave from the sea" (pg60). Previously in Acts one and two, Lorca had focused on the human characters, but Act three projects action through a much higher poetic level. Throughout most of Act three, any sense of previous naturalism that may have been displayed in the play, is lost. Along with the plot there is a significant build in the poetic images and the language used, Lorca subtly transforms the language into surrealistic and the images into greatly symbolic meanings. ...read more.

The images Lorca is creating through the characters are often a straight relation to the action in the play. In verse the language is always truth, Lorca gives the audience a chance to wholly appreciate the genuine feelings of the characters using this imaginative method. When using verse Lorca makes the association of love, beauty and death grippingly clear. At the end of the play, we are back from the strong surrealism and almost completely into naturalism. In the final scene the Wife and mother-in-law are left together mourning, after the little girl enters, announcing that deceased Leonardo and Bridegroom are being brought in, they begin speaking in verse, like a prayer. "It's the same. The cross, the cross." "Sweet nails, sweet cross, sweet name of Jesus." (pg62) The haunting last lines in a way encapsulate the tragedy where a feeling that began so small has escalated in to something that is now enormous "That barely fits the hand, But that slides in clean Through startled flesh And stops there, at the place Where trembles enmeshed The dark root of a scream." (pg63) As they have continued throughout the incoming of the bodies, it seems Lorca uses this time for the two women to almost conclude what has happened and finally end the play. ...read more.