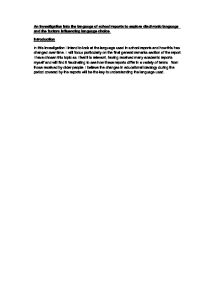 The Language used in School Reports

An investigation into the language of school reports to explore diachronic language and the factors influencing language choice Introduction In this investigation I intend to look at the language used in school reports and how this has changed over time. I will focus particularly on the final general remarks section of the report. I have chosen this topic as I feel it is relevant, having received many academic reports myself and will find it fascinating to see how these reports differ in a variety of terms from those received by older people. I believe the changes in educational ideology during the period covered by the reports will be the key to understanding the language used. Methodology My database consists of an excellent range of school reports ranging over 60 years. I collected the reports by asking family members from different generations for any school reports they still possess and from this have acquired a database of 10 reports. They were told the data would be treated confidentially and used to assist me with an English Language coursework investigation. I feel that this will allow me to provide a detailed analysis and draw conclusions of how and why the language of school reports has changed over time. I will use two main approaches when looking at my data: * Analysis 1 - Look at the complete report as a whole * Analysis 2- Looking at the final comments section of the report. I have decided to focus on this particular section as they have a less rigid format than the specific subject sections of the report. The final overview allows for more flexible, varied comments to be included with clearly more potential for significant language choices included by the teacher. ...read more.

This is mainly done through the use of euphemistic language such as "has a fair share of ability she is not yet making use of." This concept also applies to the child's parent who may see any harsh comments about their child's school life as a face threatening act to themselves. The idea of saving face is more evident in the more modern reports, most likely due to the educational context. Euphemistic language is used throughout the reports in order to protect this face. This is the teacher is saying is negative but they use language to make the statement less harsh as to not threaten the face of a parent or pupil. Terms of address can be used by the teacher to protect their face. The final section, in reports from 1990's onwards, almost without exception begins with the student's forename and with the repetition of this beginning most sentences. This shows knowledge and close contact with the pupil, making the teacher appear to have personal knowledge of each child in their class. Hedging is also a common feature, with cautious language used for any negative opinions expressed by the teacher. This may be used to avoid disagreement with a parent. Likewise, complimenting and praising the child is a positive politeness strategy used by the teacher. Subject specific lexis is far more common in post-2000 reports. The reason for this increase may be due to the more open approach that schools have adapted, with parents nationally receiving leaflets about the National Curriculum that include much educational jargon. Consequently, parents are much better informed. The teacher can use this lexis to accommodate the reader, although this is a very fine balancing act as if the parent doesn't understand the jargon, they may feel their face is being threatened. ...read more.

Certain language features regularly appeared throughout the reports and this shows that despite the changes in education, certain features of the report remain the same. Despite the typical view that school reports are formulaic, my investigation has proved otherwise and highlighted the changes in education over the past 65 years. Evaluation My database of school reports ranged from 1940's to 2000's to allow me to study the language used and change in the reports over this period of time. The reports are in chronological order for easy reference. After acquiring and reading through my database, I decided to place a focus on the final comments section as this was a common feature of all reports and would allow for a detailed analysis. Although practical restrictions would not allow, a more extensive range of school reports from earlier on, such as the 1930's would have proved useful due to the Second World War context. Also, a wider database of reports would make my investigation more precise and avoid any anomalies. Appendix 1 - Data 1a -All data Number Name of pupil Date 1 Ronald Sumner 1940 2 Elaine Turner Dec 1968 3 Elaine Turner Summer 1969 4 Tracy D July 1973 5 Tracy D July 1974 6 Tracy D July 1975 7 Tracy D July 1976 8 Tracy D Feb 1977 9 Gary Evans June 1977 10 Gary Evans June 1978 11 Tracy D Summer 1978 12 Fiona Curran July 1981 13 Gary Evans Spring 1982 14 Lucy Mayor Summer 2004 15 Lucy Mayor July 2005 1b - Final Comments Extracts Final Comment Number Pupil Date 1 Gary Evans June 1978 2 Gary Evans June 1977 3 Tracy D July 1976 4 Tracy D July 1976 5 Gary Evans Spring 1982 6 Elaine Turner Summer 1969 7 Lucy Mayor Summer 2004 Appendix 2 - Research into relevant educational context affecting the time period of the reports ...read more.

This investigation is a suitable example of a well analysed piece of A level research. The writer has performed some good analysis of the data they collected against a good range of linguistic frameworks. The introduction could have been more ...

This investigation is a suitable example of a well analysed piece of A level research. The writer has performed some good analysis of the data they collected against a good range of linguistic frameworks. The introduction could have been more detailed as to the reasoning behind the choice of investigation, perhaps highlighting some examples of the possible reasons for discursive change over the timespan of their data. This would show that you have done the appropriate research behind your choice and makes your interest seem more genuine, even if it isnÃ¢â‚¬â„¢t. They have done well in that they have analysed the data from more than one angle, regarding both the school reports as a whole as well as focusing on and effectively quoting from a particularly individual section, in this case the final comments. The writer could have improved their work if they had gone into more detail about which aspects of the reports they were going to analyse and how in the methodology section as this improves the repeatability of the investigation and ensures that they have specific aims that they can refer to later on.

The analysis demonstrated is appropriate and uses a significant amount of frameworks and levels of analysis showing a thorough understanding of the findings. This is achieved by including headings and subheadings corresponding to areas such as modality and face theory and seeking out examples. It is vital that you show you are able to examine a wide range of areas to good depth as this is what A level study is all about. Consistent comparison between reports shows that the writer is answering the question they have set for themselves as they are observing the differences in discourse over time as well as noting the similarities. The use of face theory as an analytical tool works well and often links together the individual findings about lexis and semantics, however the analysis could have benefitted from the mentioning of a few more theories and specific theorists to strengthen the support for some arguments made as this is required of candidates achieving higher grades. A more thorough conclusion encompassing the points made in the analysis using examples would have resulted in a higher mark. A good conclusion recaps the main points made in the analysis and links these together to answer the original question but this isnÃ¢â‚¬â„¢t the moment to introduce new ideas or points.

The writer has used appropriate spelling and makes his points clearly with few typographical mistakes and judiciously employed sentence structures to enhance communication. It is also important to note the wide range and frequent use of technical linguistic terminology as a sign of good understanding.