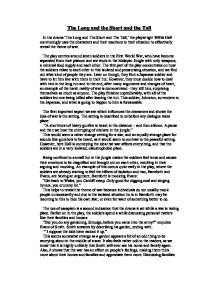 The Long and the Short and the Tall.

The Long and the Short and the Tall In the drama 'The Long and The Short and The Tall,' the playwright Willis Hall convincingly uses the characters and their reactions to their situation to effectively reveal the theme of war. The play centres around seven soldiers in the First World War, who have become separated from their platoon and are stuck in the Malayan Jungle with only weapons, a minimal food supply and each other. The first part of the play concentrates on how the soldiers relate to each other in this isolated and pressurising situation, and we find out what kind of people they are. Later on though, they find a Japanese soldier and have to let him live with them in their hut. However, they must decide how to deal with him in the long run and in the end, after many arguments and changes of heart, an example of the harsh reality of war is demonstrated - they kill him, surprising themselves as much as anyone. The play finishes unpredictably, with all of the soldiers but one being killed after leaving the hut. This soldier, Johnston, surrenders to the Japanese, and what is going to happen to him is foreseeable. ...read more.

However, when he realises that no one is behind him he resorts to taunts and sarcasm to stop him feeling defeated. This comes back to the theme of war in that it brings out pessimism and negative attitudes in people, and that it causes conflict between the soldiers who are suddenly bundled together in a confined space. Whitaker tries the radio a third time, and finds that although he picks up a small amount of sound, the radio fades due to a dead battery. Johnston gets irritated then, thinking that the dead battery could have prevented something important coming through: "Damn duff equipment. Whole damn issue's duff." It is the fault of the broken radio, which was issued by the British Army, that the men are in this situation in the first place. This shows that the men are at the mercy of those in control, indicating they have been placed there to do duties in a war that is not theirs, but their government's. Johnston and Mitchem smoke to calm themselves - this scene shows the fear and frustration that war causes. Meanwhile, Whitaker is still trying to tune into the radio. After four tries, the radio bursts into life at long last, and a Japanese voice is heard. ...read more.

He sees the soldier as an individual, like them, realising that he too has a family, which would be left without a husband and a father, should he be killed. It sometimes seems that Bamforth does not want to be there, - he refusal to kill the soldier may even convey the fact that he is against the war all together. In the end, it is Whitaker - the youngest and most vulnerable soldier in the patrol - who clumsily shoots the soldier and leads his troop to discovery and death. This is ironic because he has consistently been the most timid member of the group. The incident clearly shows the negative effect of young and badly trained soldiers being placed in horrendous situations like war. The fact that it is Johnston, the most violent member of the patrol, who should survive at the end of the play is also ironic, as after constantly telling his own patrol to kill the enemy that was the opposing soldier, he himself surrenders to the Japanese. In conclusion, I find that Hall's message about war is successfully conveyed through the characters. Each character reacts differently to the circumstances, illustrating that war concerns everybody and has many different effects. Through some of the characters, especially Bamforth and his bonding with the Japanese soldier, Hall illustrates one of his most important messages - war is between governments, not individuals. ...read more.