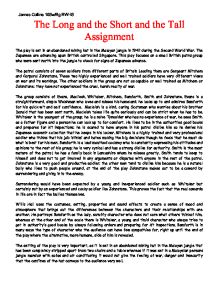 The Long and the Short and the Tall Assignment

The Long and the Short and the Tall Assignment The play is set in an abandoned mining hut in the Malayan jungle in 1942 during the Second World War. The Japanese are advancing upon British controlled Singapore. This play focuses on a small British patrol group who were sent north into the jungle to check for signs of Japanese advance. The patrol consists of seven soldiers from different parts of Britain. Leading them are Sergeant Mitchem and Corporal Johnstone. These two highly experienced and well trained soldiers have very different views on war and its workings. The other soldiers in the group are not as capable or well trained as Mitchem or Johnstone; they have not experienced the cruel, harsh reality of war. The group consists of Evans, Macliesh, Whitaker, Mitchem, Bamforth, Smith and Johnstone. Evans is a straightforward, simple Welshman who loves and misses his homeland; he looks up to and admires Bamforth for his quick wit and self confidence. Macleish is a kind, caring Scotsman who worries about his brother Donald that has been sent north. Macleish takes life quite seriously and can be strict when he has to be. ...read more.

The way Hall creates humour and a light hearted mood at the beginning of the play sets the scene for the climatic ending. In act one the author is introducing the characters to us; we are able to see what kind of people each of them are and how they feel about each other, the relationships between the soldiers are obvious. The mood only changes when the Japanese soldier enters the play and the patrol become uneasy and tense. The Japanese soldier first enters the play when out of curiosity he approaches the hut that the soldiers are hiding in. He walks up to the window, looks in and sees that there is a radio on the table but does not realise what he sees so he continues on, suddenly he does a double take and realises that there is a the radio on the table. When he walks through the door, the soldiers ambush and are going to kill him but none of them are able to kill another human being in cold blood apart from Bamforth who offers to do it and compares it to 'carving up a pig'. ...read more.

They see that he is most likely a conscript like them who was sent out to fight for his country. As a member of the audience I pity the Japanese soldier because he is an ordinary man who is a victim of war. In conclusion I feel that the Japanese soldier, without meaning to, brings destruction and the end to all of their lives, though I do not feel that the prisoner is entirely responsible for their deaths because it was Whitaker's fault that the prisoner entered the play in the first place. If Whitaker had not left the radio set on the table the Japanese soldier may not have entered the hut, but even if he had it was Whitaker who panicked and shot the prisoner forcing them all to go out fight in the battle that killed them all. Another reason for them all dying was that they could not decide what to do with the prisoner. Bamforth sympathised with the prisoner as he realised that he is a 'man' whereas the rest of the patrol are following Mitchem's orders to kill the prisoner, it could be argued that it was Bamforth's fault that they all died. I do not feel that one individual can be blamed for what happened. James Collins 10Sw/Bg BWHS ...read more.