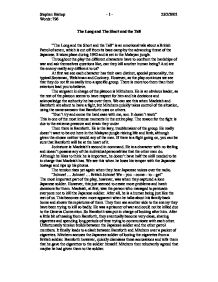 The Long and The Short and the Tall.

The Long and The Short and the Tall "The Long and the Short and the Tall" is an emotional tale about a British Patrol of seven, which is cut off from its base camp by the advancing threat of the Japanese. It takes place during 1942 and is set in the Malayan jungle. Throughout the play the different characters have to confront the hardships of war and ask themselves questions like, can they kill another human being? And are the enemy really any different to us? At first we see each character has their own distinct, special personality, the typical Scotsman, Welshman and Cockney. However, as the play continues we see that they do not fit so easily into a specific group. There is more too them than their exteriors lead you to believe. The sergeant in charge of the platoon is Mithchem. ...read more.

He is a character with no feeling and doesn't possess any of the individual personalities that the other men do. Although he likes to think he is important, he doesn't have half the skill needed to be in charge that Macleish has. We see this when he loses his temper with the Japanese hostage and rips up his photos. The tension rises yet again when they hear Japanese voices over the radio. "Johnee! ... Johnee! ... British Johnee! We - you - come - to - get" The most important part of the play, however, was when they captured a lone Japanese soldier. However, this just seemed to create more problems and harsh decisions for them. Macleish, at first, was the person who managed to persuade everyone not to kill the Japanese soldier. After all, he is a human being just like the rest of us. ...read more.

This builds up into a big argument amongst the patrol. What should be done with him? The Japanese soldier advanced towards Whitaker begging for his life. Eventually after a big argument, the scared Private Whitaker kills the Japanese soldier. This shows that even the very enemy you are trying to kill can become your friend if you become close. After all, he is just another human being right? It is very ironic that it is Whitaker who is the one that ends up killing the soldier. This is because throughout the play we see him as the quietest, gentlest member of the patrol. He is the kind of person that doesn't want to upset anyone. In conclusion I would say that this is a very successful play in delivering the real messages of war that we perhaps don't always think about. It shows how both sides can be exactly the same, even if they're fighting for completely different things; a human being is a human being. Stephen Bishop - 1 - 23/2/2002 Words: 796 ...read more.