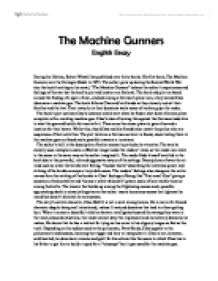 The Machine Gunners English Essay During his lifetime, Robert Westall has published over thirty books. His first book, The Machine Gunners won the Carnegie Medal in 1975. The author grew up during the Second World War also the book's setting so his novel, "The Machine Gunners" echoes the author's experiences and feelings of the war but the book's plot and location are fictional. The book and plot are based around the finding of a spoil of war, crashed among a German's plane ruin, a boy named Chas discovers a machine gun. The book follows Chas and his friends as they cleverly outwit their families and the law. Their maturity in their decisions and a sense of realism grips the reader. The book's plot outlines Chas's schemes which start when he finds a shot down German plane complete with a working machine gun. Chas's idea of turning this against the Germans leads him to steal the gun and build a fortress with it. Then come the clever plans to gain allies and a location for their haven. Whilst this, they (Chas and his friends) also outwit the police who are suspicious of their activities. The plot twists as a German survivor is found, clues linking them to the machine gun are found and a possible invasion is imminent. ...read more.

But instead of a fair fight, Chas resorts to crude techniques, "He swung his fist wildly, a yard from Boddser's face and opened his hand. Fine gravel sprayed into Boddser's eyes." But after blinding him, Chas does not stop there, he goes onto attack him, not with his fists but in a more brutal manner. "Calmly, full of murder, Chas picked up his gasmask case and swung it. It hit the side of Boddser's head with a sound like a splitting pumpkin." After the brutal attempt, you would expect Chas to stop and use his fists "intelligence" but anger seems to have gripped and blinded him. "Chas swung at him again. The gasmask dented dramatically Boddser crashed into the corrugated iron fence. Chas his raised his tin a third time. All the hate of all the years, infant school, junior school boiled up in him." The scenes outlines the flaws among the central character, only his friends Cem and Clogger stop him and it takes a few minutes for the guilt to sink in. "Chas felt like a criminal." Chas's friends ranged from the weak and strong but they are all loyal to him and vice-versa. Clogger, the strongest of the gang, is extremely violent and has a aggressive nature when fighting. This does not make him overall bad as he has his caring and compassionate attributes aswell. ...read more.

There is no German invasion just polish troops travelling south. This fact hits Chas like hot iron. Anger erupts out of him that all the preparation and all those nights thinking that a possible invasion were false. Suddenly Chas hates everyone, including their parents who are advancing on the fortress, causing him to shoot wildly, his anger clouding his mind yet again. Rudi, having returned then continues to advance on the fortress despite the children's cries of warning In the heat of the moment as the parents and the polish troops are blocked by Rudi and his continuous advancement causes Clogger to fire the pistol. Their experience has told them that they are living in a world which children can be killed but have no right to fight back. That enemies can also be misunderstandings. The children's maturity has greatly increased. They are now more "battle-worn" and show maturity beyond their age. As the final scenes close in, the policeman takes Nicky away and calls his friends, "ruffians" Nicky's reaction to this is "Get stuffed". The reason Nicky reacted like this is because Chas and his friends were his first real friends, they looked after him and took care of him. He could not stand them being called Ruffians. Robert Westall has showed a completely different view on how children were affected by the way. Despite the fiction, the story has lines of moral and truth stretched throughout a thoroughly enjoyable experience. ...read more.