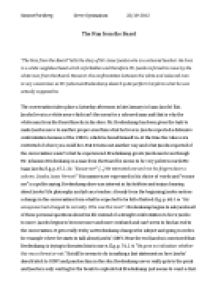 The Man from the Board tells the story of Mr. Isaac Jacobs who is a coloured teacher. He lives in a white neighbourhood which is forbidden

﻿Simone Forsberg Greve Gymnasium 22/10-2012 The Man from the Board ?The Man from the Board? tells the story of Mr. Isaac Jacobs who is a coloured teacher. He lives in a white neighbourhood which is forbidden and therefore Mr. Jacobs is forced to move by the white man from the Board. However, the confrontation between the white and coloured men is very uncommon as Mr. Johannes Bredenkamp doesn?t quite perform his job to what he was actually supposed to. The conversation takes place a Saturday afternoon in late January in Isaac Jacobs? flat. Jacobs lives in a white area which isn?t the norm for a coloured man and that is why the white man from the Board knocks in his door. Mr. Bredenkamp has been given the task to make Jacobs move to another proper area than what he lives in. Jacobs expected a defensive confrontation because of the 1980?s, which he found himself in. At the time the rules were restricted of where you could live. ...read more.

Near the end Jacobs is convinced that Bredenkamp is trying to threaten him to move. E.g. p. 74, l. 4: ?He gave no indication whether this was a threat or not.? But all he seems to do is making a last statement on how Jacobs? should stick to SONY and punches him in the ribs. Bredenkamp never really gets to the point and Jacobs is only waiting for the b**b to explode but Bredenkamp just seems to want a chat. Isaac Jacobs is a coloured man who is affected by the segregation that is still happening in the ?80s and the turning point in his life was when the Man from the Board knocked on his door. He seems to be a man with a rather boring life as all he does is sitting by his desk wondering what other people are doing in their weekends. He is a man full of thoughts and speculations of people, e.g. p. 66, l. 12: ?Why? Where? Where do people always drive to on Saturday afternoons in the heat??. ...read more.

As he is interviewing Isaac he keeps on changing his subjects and he never writes anything down. At the end he gets the feeling of him and Isaac being friends, e.g. ?We must have a long chat one day. Next time I come I?ll bring my philosophy books with me.? Mr. Bredenkamp is therefore not remarked by the segregation and a clear example of how white and black people can live together in equality. The text contains themes as racial segregation and apartheid and this is due to the association between the white and black people. You could clearly see the difference in behaviour between Isaac and Mr. Bredenkamp. The society is still affected by apartheid and how it is not allowed to associate with the different races. Isaac definitely feels attacked by the white man and he feels the need to defend himself in every way that?s possible. Being pushed away from your own home because of your skin colour is definitely something that made Isaac doubt the friendliness of Mr Bredenkamp. Apartheid had a major influence on how it affected the black and white peoples way of living. ...read more.