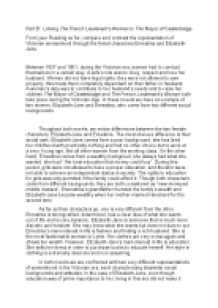 The Mayor of Casterbridge and The French Lieutenants Woman both take place during the Victorian Age. In these novels we have an example of two women, Elizabeth-Jane and Ernestina

ï»¿Part B : Linking The French Lieutenant’s Woman to The Mayor of Casterbridge From your Reading so far, compare and contrast the représentation of Victorian womanhood through the femal characters Ernestina and Elizabeth-Jane. Between 1837 and 1901, during the Victorian era, women had to conduct themselves in a certain way. A wife’s role was to obey, respect and love her husband. Women did not have legal rights, they were not allowed to own property, this made them completely dependant on their father or husband. A woman’s duty was to contribute to her husband’s needs and to raise her children.The Mayor of Casterbridge and The French Lieutenant’s Woman both take place during the Victorian Age. ...read more.

On the other hand, Ernestina comes from a wealthy backgroud, she always had what she wanted, she had ? the best education that money could buy?. During this period, girls were not allowed to have a proper education, and therefor were not able to acheive an independent status in society. The rights to education for girls was only permited if the family could afford it. Though both characters came from different backgounds, they are both considered as ?new-moneyed middle classes?, Enerestina?s grandfather founded the family?s wealth and Elizabeth-Jane became wealthy when her mother married Henchard for the second time. ...read more.

Ernectina?s main interest in life is fashion and finding a rich husband. She is the most fashionable woman in Lyme. Her clothes are very extravagant and shows her wealth. However, Elizabeth-Jane?s main interest in life is education. She sells her dress in order to purchase books to educate herself. Her style in clothing is extremelly descrete and non assuming. In both novels we are confronted with two very different representations of womenhood in the Victorian era, each characterizing dissimilar social backgrounds and attitudes. In the case of Elizabeth-Jane, even though education was of prime importance to her, living in this era did not make it possible for her to pursue this passion. Both women remain dependant on men for their livelihood. ...read more.