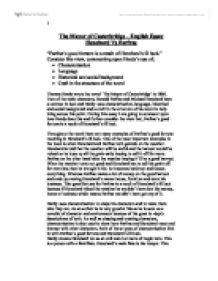 The Mayor of Casterbridge - Henchard Vs Farfrae

The Mayor of Casterbridge - English Essay Henchard Vs Farfrae "Farfrae's good fortune is a result of Henchard's ill luck." Consider this view, commenting upon Hardy's use of; * Characterisation * Language * Historical and social background * Craft in the structure of the novel Thomas Hardy wrote the novel 'The Mayor of Casterbridge' in 1886. Two of the main characters, Donald Farfrae and Michael Henchard have a contrast in luck and Hardy uses characterisation, language, historical and social background and a craft in the structure of his novel to help bring across this point. During this essay I am going to comment upon how Hardy does this and further consider the view that, Farfrae's good fortune is a result of Henchard's ill luck. Throughout the novel there are many examples of Farfrae's good fortune resulting in Henchard's ill luck. One of the most important examples in the book is when Henchard and Farfrae both gamble on the weather. Henchard is told that the weather will be awful and the harvest would be ruined so he buys up all the grain early hoping to sell it off for more. ...read more.

This good fortune for Farfrae is a result of Henchard losing a good general manager which is ill luck. Those are some of the ways that Hardy uses characterisation in shaping and interacting his characters to help us consider that Farfrae's good fortune is a result of Henchard's ill luck. The second technique Hardy uses to help get across that Farfrae's good fortune is a result of Henchard's ill luck is language. This has been achieved because Farfrae (being Scottish) has a different accent and uses different dialect to Henchard which allows him to be softer, nicer and kinder. Henchard's use of language compared to Farfrae's is a lot more harsh, rough and discomforting to other people. How each character appears by their language throughout the whole novel is different to how it was when both men came to the Casterbridge. Henchard was probably made more welcome and taken in by the surroundings better than Farfrae (we do not know this for sure because the novel does not focus on when Henchard first arrived but we can assume as he was made mayor) because he was seen as an insider as he shared the same rustic, colloquial and regional dialect as the rest of the town. ...read more.

After losing his wife Henchard travelled to Casterbridge and became mayor. This shows a very highpoint in Henchard's life. He has, wealth, status and nothing to loose as he has gained it all from nothing. When Farfrae arrives in Casterbridge he has nothing at all. He doesn't have a job or a place to live but this does not worry him as he did not plan to stay. From that time onwards Henchard's life went down hill at the same rate Farfrae's got better. In the end Henchard was back where he started (after he sold Susan and before he went to Casterbridge) with absolutely nothing. Farfrae though had everything, - a business, plenty of money, a home, a wife and the status of Mayor in Casterbridge. These two nearly exact mirrored lines show that Farfrae's good fortune must be the result of Henchard's ill luck because as Henchard lost something at the same time Farfrae gained something e.g. Lucetta. After considering the view "Farfrae's good fortune is a result of Henchard's ill luck," in detail and commenting upon how Hardy used characterisation, language, social and historical background and his craft in the structure of the novel to show this, I know that it is correct. 1 ...read more.

This essay shows knowledge and understanding of the novel and the intricacies of its plot. There is some good analysis of structure and some social and historical context. However this essay would not achieve a high grade as PEA (point, evidence, analysis) is not used. Quotes are needed to support comments - especially when discussing language.
The conclusion also needs to be less abrupt.