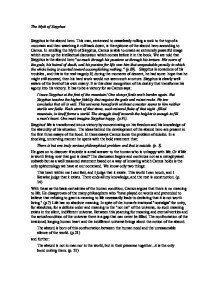 The Myth of Sisyphus

The Myth of Sisyphus Sisyphus is the absurd hero. This man, sentenced to ceaselessly rolling a rock to the top of a mountain and then watching it roll back down, is the epitome of the absurd hero according to Camus. In retelling the Myth of Sisyphus, Camus is able to create an extremely powerful image which sums up the intellectual discussion which comes before it in the book. We are told that Sisyphus is the absurd hero "as much through his passions as through his torture. His scorn of the gods, his hatred of death, and his passion for life won him that unspeakable penalty in which the whole being is exerted toward accomplishing nothing." (p.89). Sisyphus is conscious of his troubles , and this is the real tragedy.If, during the moments of descent, he had some hope that he might still succeed, then his hard work would not seem such a torture. Sisyphus is clearly well aware of the level of his own misery. It is this clear recognition of his destiny that transforms his agony into his victory. It has to be a victory for as Camus says: I leave Sisyphus at the foot of the mountain! ...read more.

answers Camus. Although the absurd cancels all chances of eternal freedom it magnifies freedom of action. Suicide is "acceptance at its extreme", it is a way of confessing that life is too much for one. This is the only life we have; and even though we are aware, in fact, because we are aware of the absurd, we can find value in this life. The value is in our freedom, our passion, and our revolt. The first change we must make to live in the absurd situation is to realize that thinking, or reason, is not tied to any eternal mind which can unify and "make appearances familiar under the guise of a great principle," but it is: ...learning all over again to see, to be attentive, to focus consciousness; it is turning every idea and every image, in the manner of Proust, into a privileged moment. (p. 20) My experiences, my passions, my ideas, my images and memories are all that I know of this world - and they are enough. The absurd person can finally say "all is well". I understand then why the doctrines that explain everything to me also debilitate me at the same time. They relieve me of the weight of my own life, and yet I must carry it alone. ...read more.

One can see now why Sisyphus is the absurd hero. He is conscious of his plight: it was his scorn of the gods, hatred of death, and passion for life that won him the penalty of rolling a rock to the top of the mountain forever, and he does not appeal to hope or to any uncertain gods. His is the ultimate absurd, for there is not death at the end of his struggle. All is not chaos; the experience of the absurd is the proof of man's uniqueness and the foundation of his dignity and freedom. All that remains is a fate whose outcome alone is fatal. Outside of that single fatality of death, everything, joy or happiness, is liberty. A world remains of which man is the sole master. What bound him was the illusion of another world. The outcome of his thought , ceasing to be renunciatory, flowers in images. It frolics - in myths, to be sure, but myths with no other depth than that of human suffering and like it inexhaustible. Not the divine fable that amuses and blinds, but the terrestial face, gesture, and drama in which are summed up a difficult wisdom and an ephemeral passion. (p. 87) One could do worse than to consider the myths-retold in the works of Camus. ...read more.