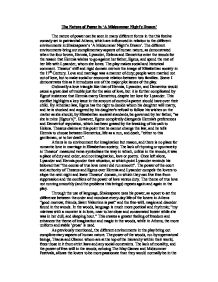 The Nature of Power in 'A Midsummer Night's Dream'.

The Nature of Power in 'A Midsummer Night's Dream' The nature of power can be seen in many different forms in the this festive comedy set in patriarchal Athens, which are influenced in relation to the different environments in Shakespeare's 'A Midsummer Night's Dream'. The different environments bring out complimentary aspects of human nature, as demonstrated when the four lovers, Hermia, Lysander, Helena and Demetrius enter the woods for the reason that Hermia wishes to go against her father, Egeus, and spend the rest of her life with Lysander, whom she loves. The play makes social and historical comment. Theseus' stiff and rigid domain mirrors the image of Elizabethan society in the 17th Century. Love and marriage was a manner of duty; people were married not out of love, but to make social or economic relation between two families. Scene I demonstrates this as it introduces one of the major plot issues of the play. Ordinarily a love triangle like that of Hermia, Lysander, and Demetrius would cause a great deal of trouble just for the sake of love, but it is further complicated by Egeus' insistence that Hermia marry Demetrius, despite her love for Lysander. This conflict highlights a key issue in the amount of control a parent should have over their child. By Athenian law, Egeus has the right to decide whom his daughter will marry, and he is shocked and angered by his daughter's refusal to follow his wishes on the matter as she should, by Elizabethan societal standards, be governed by her father, "as she is mine [Egeus's]". However, Egeus completely disregards Hermia's preferences and Demetrius' reputation, which has been grazed by the breaking of his oath to Helena. Theseus claims at this point that he cannot change the law, and he tells Hermia to choose between Demetrius, life as a nun, and death, "either to this gentleman, or to her death". ...read more.

However, Helena is as "blind" as the rest of the lovers. At this point in the play Helena is still unhappy, even though she now has both men doting on her (as Hermia did in the Theseus' domain), which again shows a darker side to the power of love and magic. Helena gives a soliloquy contemplating on the transforming nature and power of love, "Love looks not with the eyes but with the mind" which she paints as "blind". Love, according to Helena, does not see with the eyes, which tell the truth, but with the mind, which changes the truth to what the person wants. By the "mind" Helena plainly does not mean reason, but instead, something parallel to the power of the imagination. Therefore, everyone in love is blind, including Cupid himself because their eyes see what their minds want to them to see. The eyes also have the power to make people fall in love with others (a reason for why the love-in-idleness flower is applied to the eyes). This is what Helena believes has occurred to transfer Demetrius' love for her to Hermia and that love can rob people of their common sense, which is also demonstrated when Titania falls in love with Bottom under the influence of magic. The uniting and comic juxtaposition of the two symbolises a complete reversal of normal power structures in Elizabethan hierarchy, and shows contrast between the woods and the court. The connection of love to eyesight and vision are matters of vital importance in this play about love and the confusion it sometimes brings. Oberon maliciously seeks revenge on his wife by using magic and exploiting the unexpected presence of a human in the woods. Puck transforms Bottom - a mechanical's head into that of an a*s. Although the rest of the mechanicals panic and run away, Puck has merely given Bottom a head that is a reflection of his character. ...read more.

Shakespeare uses the idea of opposing worlds, both of which are indispensable for a balanced equilibrium and both places learn from each other as everyone emerges enriched at the end of their journey - the play. However, Theseus, who represents authority and believes in logic, has not been affected as he does not believe in, nor understand romantic love or magic. He has no idea what love is like and has not made any sacrifices for it (unlike Hermia and Lysander, who were willing to leave everything they knew for a life they could spend together). He has no imagination whatsoever, nor does he understand how rich the lovers' imagination is. Atypically Shakespeare, through the voice of the logical Theseus, says that a good poet should be able to create things simply out of their imagination and he subtly complements himself saying that he is one of the few poets that can actually do this. After having made fun of the conventions of the prologue and epilogue through the mechanicals, Shakespeare gives Puck an epilogue to deliver to the audience. Stepping out of the play, Puck advises the audience that if they do not like the play, they should think of it as nothing more than a dream. This recalls one last time the issue of reality and dreams in the play. The suggestion that the audience should accept the play as unreal if they did not enjoy it correlates with the characters' acceptance of the unpleasant events of the Midsummer's night as nothing more than a dream. However, if the audience did enjoy the play, then they should "Give Puck your hands, if we be friends", or applaud (ll. 425). The advice here seems to be that unpleasant things should be remembered as only a dream, and good things remembered as reality. Of the many types of power that can be seen in the jovial comedy, 'A Midsummer Night's Dream' the most powerful of all is power of the poet, which is can be seen throughout. ...read more.