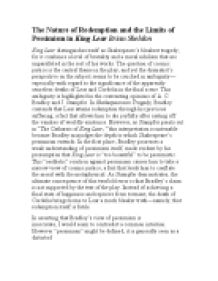 ﻿The Nature of Redemption and the Limits of Pessimism in King Lear Brian Sheldon King Lear distinguishes itself as Shakespeare?s bleakest tragedy, for it combines a level of brutality and a moral nihilism that are unparalleled in the rest of his works. The question of cosmic justice is the central theme in the play, and yet the dramatist?s perspective on the subject seems to be couched in ambiguity?especially with regard to the significance of the apparently senseless deaths of Lear and Cordelia in the final scene. This ambiguity is highlighted in the contrasting opinions of A. C. Bradley and J. Stampfer. In Shakespearean Tragedy, Bradley contends that Lear attains redemption through his previous suffering, a fact that allows him to die joyfully after casting off the vanities of worldly existence. However, as Stampfer points out in ?The Catharsis of King Lear,? this interpretation is untenable because Bradley misjudges the depth to which Shakespeare?s pessimism extends. In the first place, Bradley possesses a weak understanding of pessimism itself, made evident by his presumption that King Lear is ?too beautiful? to be pessimistic. This ?aesthetic? reaction against pessimism causes him to take a narrow view of cosmic justice, a fact that leads him to conflate the moral with the metaphysical. As Stampfer demonstrates, the ultimate consequence of this twofold error is that Bradley?s claim is not supported by the text of the play. Instead of achieving a final state of happiness and reprieve from torment, the death of Cordelia brings home to Lear a much bleaker truth?namely, that redemption itself is futile. ...read more.

For instance, Regan?s murder and Goneril?s suicide in the final act are hardly cheerful news, for they merely serve as manifestations of yet another layer of the older sisters? already immense cruelty. It is by no means obvious that their deaths resulted from any universal moral principle unless one presupposes the existence of such. This being the case, in contrast to the belief that the world is constantly seeking to expel evil from itself, the universe of King Lear seems far better captured by William Blake?s description of nature: A murderous Providence! A Creation that groans, living on Death. Where Fish & Bird & Beast & Man & Tree & Metal & Stone Live by Devouring, going into Eternal Death continually! (475) If evil is self-defeating, it is only because nature is self-devouring. By ignoring this, Bradley sounds almost like a Scholastic theologian, readily equating goodness with being. But unlike the Scholastics, he does not offer any proof of this claim, and merely assumes it from the beginning of his analysis. Murder, madness, torture, duplicity, and warfare are the status quo in the play, and moral meaning cannot be extracted from, but only imported to, the world of King Lear. At this point, we must ask why Bradley is so eager to provide a theodicy of King Lear in the first place. This becomes apparent only later on in his essay when Bradley contends that ?[t]he play could have been called The Redemption of King Lear? (205). Redemption is a concept that can be interpreted in multiple ways, however, and so it is necessary to understand what Bradley?s understanding of the term is. ...read more.

Consequently, Stampfer is correct when he notes that there is ?no mitigation in Lear?s death, hence no mitigation in the ending of the play? (152). The savage absurdity of Cordelia?s execution, when combined with the sudden realization that her death has no broader significance, is the final fracture that breaks Lear?s heart, and he dies torn between the ?extremes of illusion and truth? (151). The true significance of the play, which Bradley has forbidden himself from understanding, is the unmitigated terror that it arouses in the spectator. In Stampfer?s words, one leaves a performance of King Lear haunted with ?the fear that penance is impossible [...] the fear that we inhabit an imbecile universe? (160). Far from providing us with a means of metaphysical escape, the final scene of the play reveals that there is no significance to suffering beyond the reality of pain itself. Contrary to Bradley?s interpretation, Lear?s death proves that suffering is not the currency in which one purchases salvation, but the only truth in an otherwise meaningless existence. This is knowledge that exceeds endurance, and it is only through tragedy that we can see that the necessity of self-deception is the vital principle of an empty world. Thus Kent warns Edgar: Vex not his ghost: O let him pass! he hates him That would upon the rack of this tough world Stretch him out longer. (5.3.315-7) In no other work is the stark antinomy of truth and vitality brought to bear with such merciless focus. The denouement of King Lear is thus the final refutation of all the rationalized, moralized interpretations of human suffering, for it demonstrates that redemption itself is contingent upon illusion. ...read more.