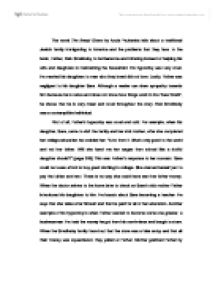 The novel The Bread Givers by Anzia Yezierska tells about a traditional Jewish family immigrating to America and the problems that they face. In the book, Father, Reb Smolinsky, is bothersome and irritating instead of helping his

The novel The Bread Givers by Anzia Yezierska tells about a traditional Jewish family immigrating to America and the problems that they face. In the book, Father, Reb Smolinsky, is bothersome and irritating instead of helping his wife and daughters in maintaining the household. His hypocrisy was very cruel. He married his daughters to men who they loved did not love. Lastly, Father was negligent to his daughter Sara. Although a reader can draw sympathy towards him because he is naive and does not know how things work in the 'New World', he shows that he is very mean and cruel throughout the story. Reb Smolinsky was a contemptible individual. First of all, Father's hypocrisy was cruel and cold. For example, when his daughter, Sara, came to visit the family and her sick mother, after she completed her college education he scolded her. "A lot from it. ...read more.

Father also wanted Sara to marry Max Goldstein, but she refused to. In his opinion, she had committed several serious errors. Throughout the rest of the story he did not apologize to her for his abusive treatment, yet his family forgave him. Reb is a hypocrite who makes his family feel servile. Another way in which Reb Smolinsky makes readers feel contempt is by marrying his daughters to people who are rich, and not to people who his daughters truly loved. He did this for his own gain and not for the good of his daughters. For instance, his daughter Mashah was in love with a pianist by the name of Jacob Novak. Father did not like Jacob because Jacob's father did not allow him to visit Mashah before and after one of his important symphonies. In this way Father thought of him as a deserter and did not like him. ...read more.

He spat angry words in her face and disowned her. He did this all because Sara refused Max Goldstein, a potential suitor for her picked by Father. Most parents of that time and today would never do such a thing. The responsibility of parents is to raise their children, teach them right from wrong, educate them, and support them emotionally and financially. Father did not do all of this. He might have told her right from wrong and taught her about the Torah, but did so in a very narrow-minded sense. Sara suffered for her father's self-centeredness and irresponsibility. Reb Smolinsky makes readers feel he is an evil individual. His unethical and disturbing actions would send him directly to jail today. Father treated his family to the point where it became disgusting. He married his daughters to abusive and unconcerned men. He scrutinized every error his family made, but said nothing when he, himself committed a wrong. He was also ignorant of his parental responsibilities. Reb Smolinsky can therefore be classified as a contemptible character. ...read more.