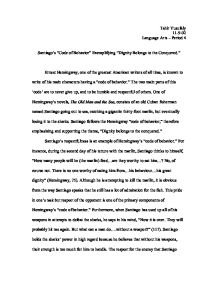 The Old Man and the Sea. Santiago follows the Hemingway code of behavior, therefore emphasizing and supporting the theme, Dignity belongs to the conquered.

Tahir Yusufaly 11-9-02 Language Arts - Period 4 Santiago's "Code of Behavior" Exemplifying "Dignity Belongs to the Conquered." Ernest Hemingway, one of the greatest American writers of all time, is known to write of his main characters having a "code of behavior." The two main parts of this 'code' are to never give up, and to be humble and respectful of others. One of Hemingway's novels, The Old Man and the Sea, consists of an old Cuban fisherman named Santiago going out to sea, catching a gigantic thirty-foot marlin, but eventually losing it to the sharks. Santiago follows the Hemingway "code of behavior," therefore emphasizing and supporting the theme, "Dignity belongs to the conquered." Santiago's respectfulness is an example of Hemingway's "code of behavior." For instance, during the second day of his tenure with the marlin, Santiago thinks to himself, "How many people will he (the marlin) ...read more.

As a result, Santiago is the prototypical Hemingway main character because of his respect for others. Within the "code of behavior" is a code of honor that Santiago illustrates. For example, when Santiago's left hand is cramped because he is forced to carry the load of the fishing line to his left shoulder, he simply tells the hand, "Cramp then if you want. Make yourself into a claw. It will do you no good" (58). Santiago does not let go of the fishing line to ease his pain because he cannot bear to forfeit his battle with the marlin. This determination to never give up is an indication of Hemingway's code of honor. Also, when Santiago is without weapons, cannot see in the dark, and knows sharks are coming to attack his marlin, he asks himself what he will do and responds to his doubts by saying, "Fight them. ...read more.

In addition, right after Santiago clubs the second pack of shovel-nosed sharks that come and eat his marlin's meat, Santiago thinks to himself, "...I have hurt them both badly and neither one can feel very good" (114). The only reason Santiago is still out at sea fighting the sharks is because through his code of honor he refuses to surrender until he has nothing left. Because he stays, the old fisherman manages to get a little dignity knowing that he clubbed the sharks and caused the enemy some pain. Hence, by following the "code of behavior," Santiago keeps some poise despite being beaten by the sharks. In conclusion, Santiago is defeated at sea, but he also gains something in the process. He is brotherly to his opponent, the marlin, and respectful to his enemy, the sharks. Santiago's humility allows for him to keep a great deal of pride regardless of his loss in the Gulf Stream. ...read more.