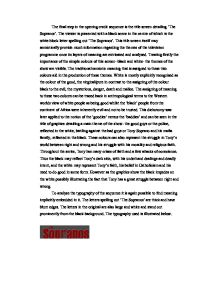 The opening credit sequence of 'The Sopranos'.

The final step in the opening credit sequence is the title screen detailing 'The Sopranos'. The viewer is presented with a black scene in the centre of which is the white block letter spelling out 'The Sopranos'. This title screen itself may semiotically provide much information regarding the themes of the television programme once its layers of meaning are extricated and analysed. Treating firstly the importance of the simple colours of this screen- black and white- the themes of the show are visible. The traditional semiotic meaning that is assigned to these two colours aid in the production of these themes. White is mostly explicitly recognised as the colour of the good, the virginal/pure in contrast to the assigning of the colour black to the evil, the mysterious, danger, death and malice. The assigning of meaning to these two colours can be traced back in anthropological terms to the Western worlds view of white people as being good whilst the 'black' people from the continent of Africa were inherently evil and not to be trusted. This dichotomy was later applied to the notion of the 'goodies' versus the 'baddies' and can be seen in the title of graphics detailing a main theme of the show- the good guys or the police, reflected in the white, battling against the bad guys or Tony Soprano and his mafia family, reflected in the black. These colours can also represent the struggle in Tony's world between right and wrong and his struggle with his morality and religious faith. ...read more.

It also suggests that he is an actor in his own future, that he directs his life and controls his destiny. This is again emphasised by the continuous close-up shots of Tony's hands and arms. The affluence of Tony's life and his materialism that is shown in the show is reflected in the opening sequences. There is a continual emphasis on Tony's gold jewellery connoting opulence, richness and his carelessness with money. The cigar that Tony smokes is also a symbol with several layers of signification for this opulence but also on another layer of meaning it may be seen as phallic, reflecting Tony's masculinity and raw s****l energy. The theme of money is again reinforced with the shot of the bank reflecting possibly Tony's implicit need for financial security for himself and his family. The religious aspect of Tony's personality is also detailed. The shot of the cathedral/church illustrates Tony's Catholicism but the shot is somewhat obscured by branches of trees. This may signify the crisis of faith that both Tony implicitly and his wife Carmela explicitly have in the show. Tony is religious, he has faith but this faith is obscured by the sins that he has committed and the illegal dealings that he is involved in. the image is almost a black and white image reflecting the clear cut base belief in God that Tony and the Soprano family hold. A red canopy on the front of the church is important as its semiotic analysis reveals that the colour red connotes a raw energy, vigour and spirituality. ...read more.

Music works primarily on the level that it can rely on the spoken word as it is sung to create meaning instead of the visual image. Non-verbal communication is also employed in music to create meaning with the use of certain instruments to evoke emotions and atmosphere. According to Self (1988:116) "title sequences ...together with title music, are instrumental in communicating the mood and themes of the coming production." The show uses the same song at the beginning of each episode. The song is 'Goy yourself a Gun' and its lyrics play on the notion of the 'mob' and the 'gun' which are both themes in a way in the programme. The song plays slowly and quietly at the start of the sequence as Tony leaves the city and gains in speed and audibility, as he gets closer to home. This illustrates that he feels strongly about where he lives and about his family. According to the song, if one is to relate it to Tony, he was 'born under a bad sign with a blue moon in your (his) eyes' (lines 7-8). This provides a hint to Tony's character, that he is immoral and does not follow the rules. Having 'blue moon' in one's eyes is indicative of Tony's upward gazing idea, that one must better themselves regardless of how they do this even if the rules must be broken. The repetition of this song at the beginning of each episode helps to continually create the overall atmosphere of the show as being one of immorality and violence connoted by the 'gun' in the song. ...read more.