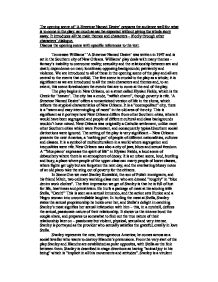 The opening scene of 'A Streetcar Named Desire' prepares the audience well for what is to come in the play, as much as can be expected without giving the whole story away. It introduces all the main themes and characters - if only through other characters

The opening scene of 'A Streetcar Named Desire' prepares the audience well for what is to come in the play, as much as can be expected without giving the whole story away. It introduces all the main themes and characters - if only through other characters' dialogue. Discuss the opening scene with specific references to the text. Tennessee Williams' 'A Streetcar Named Desire' was written in 1947 and is set in the Southern city of New Orleans. Williams' play deals with many themes - fantasy's inability to overcome reality; sexuality and the relationship between s*x and death; dependence on men; loneliness; opposing backgrounds; patriarchy and violence. We are introduced to all of these in the opening scene of the play and all are central to the events that unfold. The first scene is crucial to the play as a whole; it is significant as we are introduced to all the main characters and themes and, to an extent, this scene foreshadows the events that are to come at the end of the play. ...read more.

It is an urban scene, loud, bustling and busy, a place where people of the upper-class can marry people of lower classes, where fights get ugly but are forgotten the next day, and the everlasting bluesy notes of an old piano take the sting out of poverty for the citizens. In Scene One we meet Stanley Kowalski, the son of Polish immigrants, and his friend Mitch, two ordinary working class men who are dressed "roughly" in "blue denim work clothes". The first impression we get of Stanley is that he is full of l**t for life, heartiness and primitivism. He hurls a package of meat at his adoring wife Stella, "Catch!" This is seen as a s****l innuendo, and the action sets Eunice and a n***o woman into uncontrollable laughter. In hurling the meat at Stella, Stanley states the s****l proprietorship he holds over her, and Stella's delight in catching Stanley's meat signifies her s****l infatuation with him - this, in a nutshell, defines the s****l, passionate nature of their relationship. ...read more.

Her appearance is "incongruous to the setting" of Elysian Fields, she is "daintily dressed" out of place in the busy, bustling New Orleans. Her delicate beauty "must avoid a strong light", and there is "something that suggests a moth" in her "uncertain manner" and her white clothes. The comparison of Blanche to a moth suggests that she is very fragile and delicate, that she is vulnerable and can easily be harmed. Blanche's arrival to Elysian Fields on the "streetcar named Desire" and then the "transfer to one called Cemeteries" symbolizes her life. Through this we are told that Blanche has lived her life governed by her desires for men, and it is hinted that this will lead her to "Cemeteries" and her eventual downfall - this prepares us for the ruin of Blanche, which will come later on in the play. Blanche is fragile and destitute, she is the picture of loneliness - she has no one but Stella in the world after she "lost" Belle Reve, their childhood home, after the deaths of the older generation of the DuBois family. She is destitute and seeks help from Stella, as she is her last chance. ...read more.