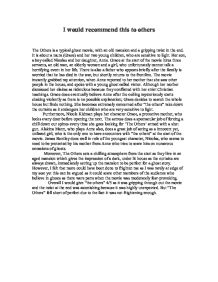 I would recommend this to others The Others is a typical ghost movie, with an old mansion and a gripping twist in the end. It is about a mum (Grace) and her two young children, who are sensitive to light. Her son, a boy called Nicolas and her daughter, Anne. Grace at the start of the movie hires three servants, an old man, an elderly women and a girl, who unfortunately cannot talk a horrifying event in her life. There is also a father who appears briefly after the family is worried that he has died in the war, but shortly returns to the frontline. ...read more.

She becomes extremely concerned after "the others" take down the curtains as it endangers her children who are very sensitive to light. Furthermore, Nicole Kidman plays her character Grace, a protective mother, who locks every door before opening the next. The actress does a spectacular job of forcing a chill down our spines every time she goes looking for 'The Others' armed with a shot gun. Alakina Mann, who plays Anne also, does a great job of acting as a innocent yet, unfazed girl, who is the only one to have encounters with "the others" at the start of the movie. ...read more.

However, I felt that more could have been done to frighten me as I was rarely at edge of my seat yet this can be argued as it could scare other members of the audience who believe in ghosts as there were parts when the movie was moderately fear-provoking. Overall I would give "the others" 4/5 as it was gripping through out the movie and the twist at the end was astonishing because it was highly unexpected. But "The Others" fell short of perfect due to the fact it was not frightening enough. ...read more.