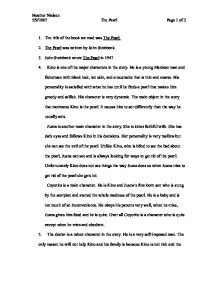 The Pearl - a brief review.

1. The title of the book we read was The Pearl. 2. The Pearl was written by John Steinbeck. 3. John Steinbeck wrote The Pearl in 1947 4. Kino is one of the major characters in the story. He is a young Mexican man and fisherman with black hair, tan skin, and a mustache that is thin and coarse. His personality is satisfied with what he has until he finds a pearl that makes him greedy and selfish. His character is very dynamic. The main object in the story that motivates Kino is the pearl. It causes him to act differently than the way he usually acts. Juana is another main character in the story. She is kinos faithful wife. She has dark eyes and follows Kino in his decisions. Her personality is very mellow but she can see the evil of the pearl. ...read more.

He also tricks Kino and Juana into believing there son was sick when he was not, the only reason his son was sick was because the doctor made him sick so Kino would pay the doctor for his services. The doctor is a sneaky man and nobody likes him. The beggars outside of the church were minor characters. They saw what was going to happen to Kino. The priest is a minor character. He told Kino he was going to be a great man so Kino would want to give up his money or some of it to help the church. The trackers were minor characters, they hunted Kino so they could steal the pearl away and kill Kino. The pearl buyers were minor characters, they tried to rip Kino off by telling him his pearl was valued at less than he thought, but the reality is that they were selfish and they wanted Kino to sell his pearl to them cheap so they can make all the money when they sell it to someone else. ...read more.

The town lays on a broad estuary with old yellow plastered buildings. It has a diversity of people in the categories of rich and poor with beggars and buyers. The mountains in the story is a setting in wicth kino and his family flee to when the trackers are hot on there trail. There are open caves to hide in, so kino decideds to take advantage to that opportunity and hides in one. In between the mountains is a valley were it is not hard to be spoted so nobody can really run from someone and expect them not to find you, so hiding on the cave was kinos best bet. 6. 1. kino wakes up in the morning to find his son in danger of his life because a scorpion was dangling on his hanging box. Kino then tries to kill the scorpion but misses and acedentaly flicks the spider to land on the baby, Coyotito, and the scorpion stings Coyotito. Heather Nielsen 5/9/2007 The Pearl Page 1 of 3 ...read more.