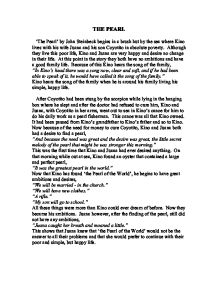 'The Pearl' by John Steinbeck.

THE PEARL 'The Pearl' by John Steinbeck begins in a brush hut by the sea where Kino lives with his wife Juana and his son Coyotito in absolute poverty. Although they live this poor life, Kino and Juana are very happy and desire no change in their life. At this point in the story they both have no ambitions and have a good family life. Because of this Kino hears the song of the family, "In Kino's head there was a song now, clear and soft, and if he had been able to speak of it, he would have called it the song of the family." Kino hears the song of the family when he is around his family living his simple, happy life. After Coyotito had been stung by the scorpion while lying in the hanging box where he slept and after the doctor had refused to cure him, Kino and Juana, with Coyotito in her arms, went out to sea in Kino's canoe for him to do his daily work as a pearl fisherman. This canoe was all that Kino owned. ...read more.

My pearl is not for sale here. I will go, perhaps even to the capital." Although Kino reacts in this angry way, Juana, again did not react at all, "Juana followed, trotting after him." This shows that the pearl does not interest Juana and that she would have preferred Kino to have never found it at all. After the trouble with the pearl buyers Juana and Juan Tom�s know that Kino is not safe with the pearl, however Kino still insists that he will keep the pearl and go to the capital to sell it. That night, when Kino, Juana and Coyotito were back in their brush hut, Kino steps outside of the hut and is attacked. Kino does not see the attackers and is left only half conscious. With the aid of Juana, Kino regains consciousness but Juana is now trying to persuade Kino to rid them of the pearl and the evil it carries with it, "Kino, this pearl is evil. Let us destroy it before it destroys us. Let us crush it between two stones. Let us - let us throw it back in the sea where it belongs. ...read more.

Something was wrong." Just then he realized - realized that he had killed his only son Coyotito, "The keening, moaning, rising hysterical cry from the little cave in the side of the stone mountain, the cry of death." After the death of Coyotito Kino and Juana returned to the city and to their brush hut and their poor and simple family life, "In Kino's ears the song of the family was as fierce as a cry." Now Kino realized that the pearl had been bringing them evil all along and that Juana was right about it, "And the pearl was ugly; it was grey, like a malignant growth. And Kino heard the music of the pearl, distorted and insane." Kino decided to get rid of the pearl and so get rid of the evil and darkness that it carries with it, "And Kino drew back his arm and flung the pearl with all his might. Kino and Juana watched it go, winking and glimmering under the setting sun." And so the pearl was gone forever into the sea where it belonged and from once it came and Kino and Juana were back to their brush hut and living their family life as normal. "And the music of the pearl drifted to a whisper and disappeared." By Mohammed Abdelhalim ...read more.