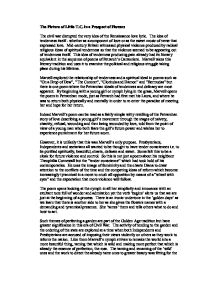 The Picture of Little T.C. in a Prospect of Flowers .

The Picture of Little T.C. in a Prospect of Flowers The civil war disrupted the very idea of the Renaissance love lyric. The idea of tenderness itself - whether as a component of love or as the sweet music of verse that expressed love. Mid-century Britain witnessed physical violence produced by radical religious ideas of spiritual tenderness so that the violence seemed to be appearing out of tenderness itself. This idea of tenderness producing pain already had its literary equivalent in the sequence of poems of Petrarch's Canzoniere. Marvell takes this literary tradition and uses it to examine the political and religious struggle taking place during his lifetime. Marvell explored the relationship of tenderness and a spiritual ideal in poems such as "On a Drop of Dew", "The Coronet", "Clorinda and Damon" and "Bermudas" but there is one poem where the Petrarchan ideals of tenderness and delicacy are most apparent. By beginning with a young girl or nymph lying in the grass, Marvell opens the poem in Petrarchan mode, just as Petrarch had first met his Laura, and where he was to return both physically and mentally in order to re-enter the paradise of meeting her and hope for her return. Indeed Marvell's poem can be read as a fairly simple witty retelling of the Petrarchan story of love describing a young girl's movement through the stages of naivety, chastity, refusal, wounding and then being wounded by love, told from the point of view of a young man who both fears the girl's future power and wishes her to experience punishment for her future scorn. ...read more.

These "virtuous" people, as they see themselves, who engage in military conquest, are the "enemy of man" with their "command severe" and "chaster laws" and if one is not in their party, they must be "appeased". Marvell shows us their triumph from the viewpoint of the defeated or the bystander, in the dust, beneath the powerful chariot wheels. In the opening stanzas the voice of the speaker is constrained as he is compelled to praise rather than freely praising. Although the poem begins in the present tense it is clear by stanza 3 that the speaker already knows what will happen in the future, and the certainty with which he announces his desire to hide from the nymph's "force" strengthens the already present sensation, in the first stanza, that the speaker is observing the nymph and reporting on her from an unseen, safe hiding place. "Compound" evokes the process by which Royalists who were afraid their property would be sequestered or whose property had been sequestered could compound their estates by paying a heavy monetary fine and taking the covenant and later Engagement Oath, a kind of psychological subjection that, once agreed, would wash the former Royalist clean. Yet even those who did "yield" in this way were still despised and subjected to new assaults. No wonder Marvell does not want to get too close to this kind of glory. ...read more.

But the poem ends with a warning that someone will come to reform them. The discipline will be turned against the reformers themselves. Flora in the 17thC had become associated with the monarch who rules the garden. Flora, the queen of the shepherds, had long been associated with royalty. Marvell now warns of a retribution coming from the return of a royal figure. In the poem we meet a young girl lying in the grass who becomes a victorious general of an army commanding and breaking her adversary, then, a triumphant charioteer driving over the body of her prone enemy, then merely a girl who towers over only the flowers and finally, diminished, she is humiliated by the regal figure of Flora in the final stanza. Meanwhile the speaker too has undergone an opposite deflation and inflation. At first he is out of view, looking on from an unknown vantage point. Later he is positioned more precisely under the driving wheels of the chariot. In the final stanza he emerges with full power, pronouncing retribution on the nymph as he predicts the future of the girl and the garden. Little T.C. thinks of herself as a chaste child of nature and of the gods but ultimately wreaks violence on nature and on others until she brings retribution on herself. Far from being in love with a nymph Marvell spies on her self-proclaimed innocence from his hidden corner of the garden, filled with fantasies of a retribution that will sweep her away. ?? ?? ?? ?? ...read more.