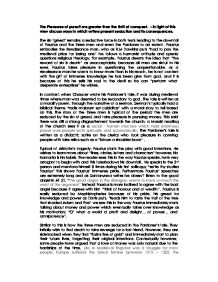 The Pleasures of pursuit are greater than the thrill of conquest. In light of this view discuss ways in which writers present seduction and its consequences. The sin greed remains a seductive force in both texts leading to the

The Pleasures of pursuit are greater than the thrill of conquest. - In light of this view discuss ways in which writers present seduction and its consequences. The sin 'greed' remains a seductive force in both texts leading to the downfall of Faustus and the three men and even the Pardoner to an extent. Faustus embodies the Renaissance man, who as R.M Dawkins puts "had to pay the medieval price for being one" he follows a humanist attitude and openly questions religious theology. For example, Faustus deems the idea that "the reward of sin is death" as unacceptable, because all men are sinful in his eyes. Faustus takes pleasure in questioning the unquestionable, as a renaissance man he wants to know more than in his reach, he is not content with the gift of immense knowledge he has been give from god, and it is because of this he sells his soul to the devil so he can "perform what desperate enterprises" he wishes. In contrast, when Chaucer wrote his Pardoner's tale, it was during medieval times where man was deemed to be secondary to god. ...read more.

see this in the way Faustus immediately starts talking about money and power which eventually takes over knowledge as his motivation; "O' what a world of profit and delight... of power... and omnipotence". Similar to this is how the three men are seduced in the Pardoner's tale. They initially wish to find death to take revenge for a lost friend. However, they are sidetracked when they find "florins fine of gold" and immediately start to plan their future lives, forgetting their original intentions. Contextually however, some people have argued that a love of money was only natural due to the hardships of the time. Life in Medieval England was a struggle for most people. Europe suffered the Great famine between 1315 - 1322, the Peasant's revolt in 1381 broke out about taxes and the Black Death killed a third of the population. This said, the three men are still sinful, and like Faustus have their pursuit driven by greed. Reminiscent of Faustus and the three men, the Pardoner also takes pleasure in the pursuit of money. ...read more.

wrong doings "Ay, pray for me, pray for me" which is typical of a renaissance play, it is too late, the reputation and use of commas create the image of vulnerable and frightened Faustus which contrasts with the arrogant Dr the reader sees at the beginning of the play. Like Faustus, the three men also see a consequence in their pleasure of pursuit. It is ironic that they originally search for death where in reality death finds them. In the context of a sermon this is typical; the message could be seen as similar to Marlowe's the bible says "the wages for sin is death...but the gift of god is eternal life" the men go against god through the sin of greed, and therefore are punished like Faustus was. The two writers place greed as a seductive force which leads the characters to commit further sins in the form of treachery, and gluttony. However there is a sense of poetic justice as the characters are punished for their behaviour, Faustus is damned to h**l, the three men are killed and The Pardoner fails in his art of deception. Ameer P ...read more.