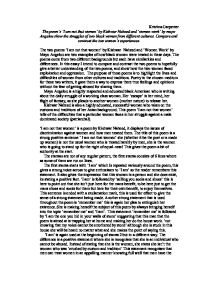 The poem's 'I am not that women' by Kishwar Naheed and 'women work' by mayo Angelou show the struggles of two black women from different cultures. Compare and contrast the two women's experiences.

Kristina Carpenter The poem's 'I am not that women' by Kishwar Naheed and 'women work' by mayo Angelou show the struggles of two black women from different cultures. Compare and contrast the two women's experiences. The two poems 'I am not that women' by Kishwar Naheed and 'Women Work' by Mayo Angelou are two examples of how black women were treated in these days. The poems come from two different backgrounds but each have similarities and differences. In this essay I intend to compare and contrast the two poems to hopefully give a better understanding of the two poems, and show how the two women faced exploitation and oppression. The purpose of these poems is to highlight the lives and difficulties of women from other cultures and traditions. Poetry is the chosen medium for these two writers, it gave them a way to express there true feelings and opinions without the fear of getting abused for sharing them. Mayo Angelou is a highly respected and educated black American who is writing about the daily struggle of a working class woman. Her 'escape' is her mind, her flight of fantasy, as she pleads to another women (mother nature) to release her. Kishwar Naheed is also a highly educated, successful woman who takes on the customs and traditions of her Asian background. This poem 'I am not that women' tells of the difficulties that a particular women faces in her struggle against a male dominated society (patriarchal). ...read more.

when I am drowning' Before this sentence she refers to the man as him not knowing that she is this strong that she can get back up when pushed down 'not knowing'. Stanza four is different to any of the other stanzas, the poet is now addressing a different man, her father. 'I am the one you married off to get rid of a burden' this tells us how she has being married off by her father so he doesn't have the responsibilities of her, this was called dowry, where the father of a women paid a man to marry her. The word 'burden' is a common noun which is used to describe a thing, this women isn't a thing though, she is a person with her own personality her own freedom, her own way of living. The poet is always fighting with the thoughts of these men by using 'I am not' and 'not knowing' suggesting they don't know what's right and who she is. She uses 'not knowing' again 'that a nation of captive minds cannot be free' to suggest that this man and all other men are trapping these women and using them for indecent purposes. Stanza 5 ends the poem but with a slight change at the end. The word 'commodity' is used at the beginning of this stanza to make out shes a thing that people trade in when they aren't satisfied. ...read more.

Both poems come from different backgrounds and even though they are aimed at the same type of problem they come from very different perspectives. 'Women Work' is a more personal point of view where as 'I am not that women' is writing for universal women and sticking up for the rights of others. The tone of both poems is very different as well 'I am not that women' is a more strong voice with attitude and harshness whereas 'Women Work' is more mellow but frustrated, this women is giving feelings of her daily lifestyle and the sadness she is being put through, she gives wishes as well, things she wants to feel. Both of these poems included metaphors, repition and alliteration for effect of feeling emotions. 'Women Work' uses rhyming couplets and a ABCB rhyme scheme, which is not used in 'I am not that women', this poem goes without rhyme. The stanza length varies in each poem but 'Women Work' has a regular pattern after stanza one with ABCB. I like theses two poems, I prefer 'I am not that women' as it is more aggressive while 'Women Work' relaxes near the middle and doesn't show as much anger towards the men of society. Times have changed in the last 60 years, Women are now not as discriminated as they used to be, men have more respect for them. It is to poets like Mayo Angelou and Kishwar Naheed that give us a sense of how women were treated and how times have changed for the better. ...read more.