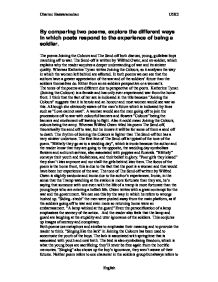 The poems Joining the Colours and The Send-off both discuss, young, guileless boys marching off to war. The Send-off is written by Wilfred Owen, and ex-soldier, which explains why the reader acquires a deeper understanding

By comparing two poems, explore the different ways in which poets respond to the experience of being a soldier. The poems Joining the Colours and The Send-off both discuss, young, guileless boys marching off to war. The Send-off is written by Wilfred Owen, and ex-soldier, which explains why the reader acquires a deeper understanding of war and its sinister quality. Whereas Katherine Tynan writes Joining the Colours, so it analyses the way in which the women left behind are affected. In both poems we can see that the authors have a greater appreciation of the war and of the soldiers' future than the soldiers themselves do. Either from an ex-soldiers perspective or a woman's. The tones of the poems are different due to perspective of the poets. Katherine Tynan {Joining the Colours} is a female and has only ever-experienced war from the home front. I think that the fact of her sex is indicated in the title because "Joining the Colours" suggests that it is heroic and an honour and most women would see war as this. Although she obviously aware of the men's future which is indicated by lines such as "Love cannot save". A woman would see the men going off to join the processions off to war with colourful banners and flowers "Colours" being the banners and excitement off leaving to fight. ...read more.

Both poems use metaphors and similes to emphasise their meaning and to provoke the reader to think. "Singing like the lark" in Joining the Colours has been used to accentuate the youth of the boys. The lark is associated with springtime that is associated with youth and new birth. The bird is also symbolising freedom, which is what the young boys are sacrificing; they'll never be free again from the horrific memories. "Singing" also shows up the boy's ignorance, they aren't aware of their futures. Neither poem refers to one character in the soldiers group but always refers to them as "they", this conveys that the soldiers are anonymous and it is a premonition of what's to come: they will die on the battlefield anonymous and will be buried anonymously. Katherine Tynan also uses personification in the line "food for shells and guns" where she gives guns and shells human qualities. This creates an image of a terrifying war machine slaughtering young innocent boys, to feed its hunger for violence. Owen also uses personification "Signals nodded" nodding is like giving your consent, in this context giving consent for the train to leave. But its underlying meaning is I think the signal is giving consenting to the massacre of yet another group of boys. ...read more.

Joining the Colours has alternate lines the first being positive and the second negative, such as "marching all in steps so gay" and then "food for shells and guns" throughout the poem. In The Send-off there isn't a definition of positive and negative between lines, but the poem still takes the reader on a journey with the soldiers to their deaths, except not in each stanza like Joining the Colours but slowly, starting with them leaving and ending with some returning. Each poem and the way in which it is structured has a strong impact on the reader. The Send-off doesn't flow as do not well as the other nor does it have contrasting with lighter lines therefore it makes the reader concentrate on the important issues, the futility of war and therefore it has a larger impact. Joining the Colours has more of an impression on me although I personally prefer The Send-off as a poem. Because of the contrasting lines particularly "mothers sons" and "food for shells and guns" explained previously. This really forces the reader to think about the futility of war and the different views so close together. I believe that poems such as these are essential to understanding the war, because they delve deep into the heinous treacherous crimes, not only of the soldiers but also of the government. All these points are tainted with the feelings, fear, deceit, excitement, and finally love. ?? ?? ?? ?? Dharren Easwaramohan U5K2 English ...read more.