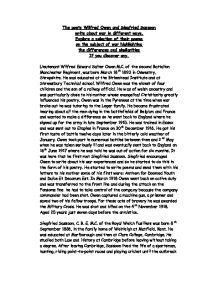 The poets Wilfred Owen and Siegfried Sassoon write about war in different ways. Explore a selection of their poems on the subject of war highlighting the differences and similarities, if you discover any.

The poets Wilfred Owen and Siegfried Sassoon write about war in different ways. Explore a selection of their poems on the subject of war highlighting the differences and similarities If you discover any. Lieutenant Wilfred Edward Salter Owen M.C. of the second Battalion Manchester Regiment, was born March 18th 1893 in Oswestry, Shropshire. He was educated at the Birkenhead Institute and at Shrewsbury Technical school. Wilfred Owen was the eldest of four children and the son of a railway official. He was of welsh ancestry and was particularly close to his mother whose evangelical Christianity greatly influenced his poetry. Owen was in the Pyrenees at the time when war broke out he was tutoring to the Leger family. He became frustrated hearing about all the men dying in the battlefields of Belgium and France and wanted to make a difference so he went back to England where he signed up for the army in late September 1915. He was trained in Essex and was sent out to Etaples in France on 30th December 1916. He got his first taste of battle twelve days later in the bitterly cold weather of January. Owen took part in numerous battles between then and 2nd May when he was taken seriously ill and was eventually sent back to England on 16th June 1917 where he was told he was out of action for six months. ...read more.

Sassoon participated in the Second Battle of the Scarpe where he was wounded in the shoulder. This particular incident started a train of events which culminated in Sassoon's "Declaration", for it was whilst on convalescent leave after being wounded that Sassoon talked to several prominent pacifists (including John Middleton Murry and Bertrand Russell). His declaration of "wilful defiance" was written during this time, and he returned to the Depot in Liverpool having sent his statement to his Colonel, miserably determined to take whatever punishment was handed out. Fortunately for Sassoon, his friend and fellow Welch Fusilier, Robert Graves (1895-1985) got to know Sassoon while serving out in France. The two became firm friends and spent hours discussing poetry. He was influential in saving Sassoon from a court-martial, following the latter's protest against the continuation of the War. Graves intervened, pulled strings with the authorities and managed to persuade them to have Sassoon medically boarded (or referred), with the result that in July 1917 he was sent to Craiglockhart War Hospital, Edinburgh officially suffering from shell shock. It was at Craiglockhart that Sassoon met Wilfred Owen. Owen was also in the hospital after being diagnosed with shell shock. Sassoon himself wrote a good deal of poetry whilst at Craiglockhart and the material he wrote at that time was about his experiences and that he thought that many people back home in Britain were making money from war while his fellow soldiers were being slaughtered. ...read more.

followed by 'A few, a few, too few for drums and yells'. This tells the reader that very few of these conscripts ever returned from their living hell. Siegfried Sassoon's poems often describe things he saw in a lot more detail with him describing what exactly he saw and thought, but did write about how some were pushed into going to war and going out to fight. It was these people that Siegfried thought were prolonging the war for longer than was necessary. In the 'Memorial Tablet' Sassoon writes of how one particular boy or young man was pushed into going to war by a 'squire' this boy or young man was killed by a shell 'and then a shell Burst slick upon the duck-boards: so I fell'. At a memorial service for the dead the squire who sits 'in his pew' and 'he gives my gilded name a thoughtful stare', is thinking of what he has done. It is his fault for pushing this boy or young man to go to war and he is now dead. This was the sort of thing that Sassoon was trying to get at in his writing. Trying to make people stop and think that this war was being prolonged for longer than it needed to be and it should be finished before more men needlessly died. 2 Chris Currie 11 Temple ...read more.