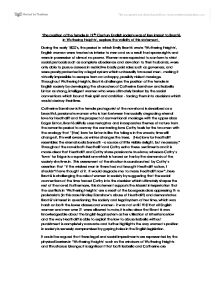 The position of the female in 19th Century English society was of key import to Bront in Wuthering Heights, explore the validity of this statement.

'The position of the female in 19th Century English society was of key import to Bront� in Wuthering Heights', explore the validity of this statement. During the early 1800's, the period in which Emily Bront� wrote 'Wuthering Heights', English women were treated as inferior to men and as a result had sparse rights and were in possession of almost no power. Women were expected to conform to strict social protocols such as complete obedience and devotion to their husbands, were only able to pursue careers in restrictive badly paid roles such as governess, and were poorly protected by a legal system which universally favoured men- making it virtually impossible to escape from an unhappy, possibly violent marriage. Throughout Wuthering Heights, Bront� challenges the position of the female in English society by developing the characters of Catherine Earnshaw and Isabella Linton as strong, intelligent women who were ultimately broken by the social conventions which bound their spirit and ambition- forcing them into decisions which would destroy their lives. Catherine Earnshaw is the female protagonist of the novel and is described as a beautiful, passionate woman who is torn between her socially degrading eternal love for Heathcliff and the prospect of ...read more.

Furthermore, this statement supports the Marxist interpretation that the conflicts in 'Wuthering Heights' are a result of the bourgeois class oppressing the proletariats (in this case Hindley Earnshaw's abuse of Heathcliff) and demonstrates Bront�'s interest in questioning the society and legal system of her time, which was harsh on both the lower classes and women- it was not until 1918 that all English women and men over 21 were allowed to vote; it is also clear that Bront� was knowledgeable about the English legal system as her utilisation of inheritance law and the way Heathcliff is able to exploit the law to abuse Isabella without punishment is completely accurate and further highlights the way women's position in society is severely compromised by gaping holes in the English legislation. It could be argued that these legal and social impediments are represented by the physical barriers in 'Wuthering Heights' such as the windows of Wuthering Heights and Thrushcross Grange; it is significant that both Isabella and Catherine are imprisoned by these barriers as it demonstrates that women of all class are confined by the restraints of the patriarchal society which they live in. ...read more.

from her home which she loved so much; her decision to marry Heathcliff ends badly, just as Cathy's marriage to Linton is ultimately doomed. It is also significant that Lockwood's first encounter with Catherine's name is in her notebooks which are scrawled with three different names, 'Catherine Earnshaw', 'Catherine Heathcliff' and 'Catherine Linton'- this is Bront� demonstrating the way women are owned by men even in their name, one's most powerful asset, an idea further corroborated by Nelly calling Isabella 'Mrs. Heathcliff'. Ideas such as this issue of ownership are prevalent throughout 'Wuthering Heights' and Bront� constantly challenges the social patriarchy in which she lived by articulating her message that women are equal to men through the suggestion that women are being unfairly treated at the hands of their husbands, the legal system and the social protocol which they are forced to abide by. There is a consistent theme of physical and mental barriers in the novel and it is clear that Emily Bront� was trying to break down the metaphorical barriers facing women in the 19th Century by questioning their treatment and developing the characters of Isabella and Cathy to inspire other women to break free from their shackles. ...read more.