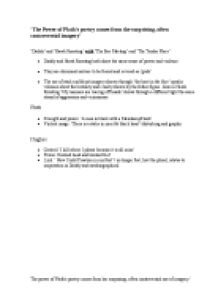 'The Power of Plath's Imagery comes from her surprising, often controversial imagery' How far do you agree with this statement?

﻿?The Power of Plath?s poetry comes from the surprising, often controversial imagery? ?Daddy? and ?Hawk Roosting? with ?The Bee Meeting? and ?The Tender Place? * Daddy and Hawk Roosting both share the same sense of power and violence. * They are dominant and are to be feared and revered as ?gods? * The use of stark and blunt imagery shown through ?the boot in the face? speaks volumes about the brutality and cruelty shown by the father figure. Also in Hawk Roosting ?My manners are tearing off heads? shows through a different light the same strand of aggression and viciousness. Plath * Strength and power: 'A man in black with a Meinkampf look' * Violent image: 'There is a stake in your fat black heart' /disturbing and graphic Hughes * Control: 'I kill where I please because it is all mine' * Power: Hooked head and hooked feet' * Link: ' Now I hold Creation in my foot' / no longer feet, lost the plural, relates to amputation in Daddy and autobiographical. The power of Plath's poetry comes from her surprising, often controversial use of imagery.' Plath shows her surprising and often controversial imagery through the remarkable art of taking inanimate, lifeless objects and using them to describe emotion and personal suffering. ...read more.

This imagery is extremely controversial as the use of the Holocaust has caused much disagreement. Many critics have condemned her comparison of mass human suffering, torture, death and persecution to that of her own personal suffering. The persona is a victim that has been ground down for so long by the Father figure that in the lines 'I think I may well be a Jew' and 'With my gipsy ancestress and my weird luck' she places herself alongside other victimised groups. Her complete detachment and estrangement from her Father is reflected in the relationship between Jews and Germans, 'I thought every German was you'. Hughes also uses surprising imagery which is very often aggressive, controlling and dominant. The use of a hawk roosting is an interesting angle used to display the ferocity and cruelty of nature. For example 'I sit at the top of the wood'...'my hooked head and hooked feet' show power and threat through supremacy and rulership. Controversy is shown through the personification of the hawk as God, 'Now I hold Creation in my foot'. This has an air of arrogant self-worth and dominance that the hawk will 'keep things like this'. ...read more.

This idea that is explored half-way through the poem comes into fruition with the conclusion of the persona's journey and simultaneously the end of the poem. 'Whose is that long white box in the grove' alluding to the thought of a coffin, signifying her death. Similarly 'The Tender Place' uses surprising imagery that will have a strong impact on the reader. The hyperbole of 'it exploded Like a grenade.' makes the reader feel the destructive force of the treatment. 'They crashed the thunderbolt into your skull.' creates a deep impact of the extraordinary brutality of a medical care. Controversy is explored through the line 'To see how you were, in your straps. Whether your teeth were still whole'. This shows the doctors are checking her frame for damage whilst caring nothing for the her well being. Interestingly, it is Hughes who takes the standpoint of declaring the cruelty of humanity and Plath who declares the cruelty of nature. This is a reversal of stance for both poets. They are both extraordinarily talented in their craft and create raw and powerful pieces. Therefore, it can be said that although Plath and Hughes are different in approach they share the same intention which is to portray cruelty shown through human kind and nature. ...read more.