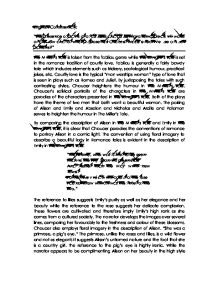 The presence of pairs or of doubles and doubling often appears in works of art. How and for what purpose has Chaucer made effective use of such patterns?

English Commentary: "The presence of pairs or of doubles and doubling often appears in works of art. How and for what purpose has Chaucer made effective use of such patterns?" The Miller's Tale is taken from the fabliau genre while The Knight's Tale is set in the romance tradition of courtly love. Fabliau is generally a fairly bawdy tale which includes elements such as trickery, scatological humour, practical jokes, etc. Courtly love is the typical "man worships woman" type of love that is seen in plays such as Romeo and Juliet. By juxtaposing the tales with such contrasting styles, Chaucer heightens the humour in The Miller's Tale. Chaucer's satirical portraits of the characters in The Miller's Tale are parodies of the characters presented in The Knight's Tale. Both of the plays have the theme of two men that both want a beautiful woman. The pairing of Alison and Emily and Absalon and Nicholas and Arcite and Palamon serves to heighten the humour in The Miller's Tale. ...read more.

In his long description of Absalon in The Miller's Tale, Chaucer comically subverts the romance convention of describing the lady in great detail. The way Absalon is described doesn't make him appear very masculine. "Curly was his hair, and as the gold it shone, And stretched out like a fan large and broad; Very straight and even lay his elegant parted hair" "Very fair and thick are the laces set. And over that he had a gay surplice As white as in the blossom upon the branch." "And plays songs on a small fiddle, To which he sometimes sang a loud high." The fact that Absalon is described using words such as, "elegant", "blossom", "loud high", make him seem quite girly in comparison to the description of one of the knights who fought for Palamon in the final battle for Emily. "Black was his beard and manly was his face." "With shaggy hairs on his stout brows; His limbs large, his muscles hard and strong, His shoulders broad, his arms round and long; And as was the fashion in his country, He stood full high upon a chariot of gold." ...read more.

"And intimately he caught her by the crotch, And said, 'Indeed, unless I have my will, For secret love of thee, sweetheart, I die.'" "And said, 'sweetheart, love me immediately Or I will die, so save me god.'" These descriptions of Nicholas' pain seem over exaggerated. This contrasts with the lengthy description of Arcite's suffering. This adds another comic element to the tale as it seems that Nicholas doesn't really love Alison like how Arcite loves Emily. It juxtaposes a serious and a miserable tone to a "love me or I'll die" overstatement used by Nicholas in his rapid seduction of Alison. In conclusion, the presence of pairs and doubles is very effective. Chaucer has made a successful use of them to help emphasise the humour in The Miller's Tale use of the juxtaposition and the contrasting between pairs from both The Miller's Tale and The Knight's Tale. By parodying The Knight's Tale with a more exaggerated and humorous play; it makes The Miller's Tale more funny to the reader because there is something to compare it to. ?? ?? ?? ?? ...read more.