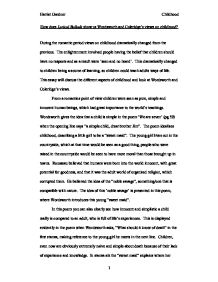 The presentation of Childhood in lyrical ballads

How does Lyrical Ballads show us Wordsworth and Coleridge's views on childhood? During the romantic period views on childhood dramatically changed from the previous. The enlightenment involved people having the belief that children should have no respects and as a result were 'seen and no heard'. This dramatically changed to children being a source of learning, so children could teach adults ways of life. This essay will discuss the different aspects of childhood and look at Wordsworth and Coleridge's views. From a romantics point of view children were seen as pure, simple and innocent human beings, which had great importance to the world's teachings. Wordsworth gives the idea that a child is simple in the poem 'We are seven' (pg 59) when the opening line says "a simple child, drear brother Jim". The poem idealises childhood, describing a little girl to be a "sweet maid". The young girl lives out in the countryside, which at that time would be seen as a good thing, people who were raised in the countryside would be seen to have more moral than those brought up in towns. ...read more.

Another example showing this is how she says, "I sit and sing to them" suggesting she believes they are listening and can hear her. She is persistent there are seven siblings all together even though two are "in heaven" which would mean there are five. Wordsworth in two of his poems, "We are Seven" and "Anecdote for Fathers" presents a patronising attitude towards children, in a way that he continuously asking them things, questioning their thoughts, how they feel and what they believe; "My little boy which you like more?" (pg 57. Anecdote for fathers) " 'Yet you are seven; I pray you tell 'Sweet maid, how this may be? " (pg 60. We are Seven) This suggests that Wordsworth disagrees with Rousseau idea and believes that adults cannot learn from children because they lack life's experience resulting in naivety and simple outlooks on life. In contrast, at the end of Anecdote for Fathers, Wordsworth attempts to establish the theme of innocence, being a child and how this can have influence on man, as well as mans influence on the child. "Of what from thee I learn" (pg 58) ...read more.

This boy is a prime example of Rousseau's idea of the 'noble savage', being brought up with nature. His association with the natural world enables him to understand the names of birds easily and is familiar with all their calls, suggesting his intelligence. "But knew the names of birds, and mocked their notes" However, the foster mother criticises him, saying he is "unteachable", because he rejected religion and wouldn't learn his prayers, showing a very narrow minded view on what education is. As a child the boy is found "wrapped in mosses" by a friar who raises him and taught him to stick to his beliefs and not to change them for others. It is suggested that the boy is only able to learn from the friar, which shows a significance towards the idea that we learn better from the ones we love. From the four poems I have discussed in Lyrical Ballads, the idea of Jean Jacques Rousseau has a major influence on the presentation of childhood given by Wordsworth and Coleridge. Also there is the idea that a child's innocence in easily taken away by an attempt to teach them to be more worldly and sophisticated. Harriet Gardner Childhood 1 ...read more.