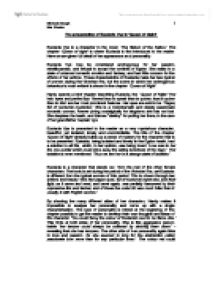 The presentation of Eustacia Vye in 'Queen of night'

The presentation of Eustacia Vye in 'Queen of night' Eustacia Vye is a character in the novel 'The Return of the Native.' The chapter 'Queen of night' is where Eustacia is first introduced to the reader. Here we are given full detail of her appearance and personality. Eustacia Vye may be considered androgynous for her passion, rebelliousness, and refusal to accept the confines of Egdon. She exists in a state of untamed romantic emotion and fantasy, and has little concern for the effects of her actions. These characteristics of Eustacia make her less typical of women during the Victorian Era, but the scene in which her androgynous behaviour is most evident is shown in the chapter 'Queen of Night' Hardy spends a brief chapter describing Eustacia, the 'Queen of Night.' Her hair, eyes and perfect lips 'formed less to speak than to quiver; less to quiver than to kiss' are her most prominent features. Her eyes are said to be 'Pagan, full of nocturnal mysteries.' She is a melodramatic and deeply passionate romantic woman, forever pining nostalgically for kingdoms she has not lost. She despises the heath, and blames "destiny" for putting her there, in the care of her grandfather Captain Vye. ...read more.

The colour red could symbolise love and anger, this is where l get the impressions of her personality. Eustacia's beauty is highlighted and expanded in full detail to emphasise the difference between her and women of the Victorian Era. 'Eustacia Vye was the raw material of divinity.' This is almost beyond any other beauty. Yet, Hardy still goes on to describe the beauty of Eustacia, emphasising more by going in to very fine detail 'So fine were the lines of her lips, that though full, each corner was clearly cut as the point of a spear.' Lips are small features and yet such detail is used. Another point to be made that highlights Eustacia's difference between her and other female characters is the fact that she hates the heath and she hates tradition 'Egdon was her Hades' (Hades meaning place of death in Greek mythology) Eustacia hates it so much she believes it will be the death of her, she appears as a person struggling to come to terms with a lifestyle that has not turned out at all according to her expectations. As the 'odd one out', the reader gets the feeling that no matter what she tries to do, she will never be able to integrate ...read more.

There is perhaps a parallel here between Hardy's refusal to write within the accepted format of the time and his portrayal of Eustacia as a misfit within the society in which she lives. Both Eustacia and Hardy are bound by what is socially and artistically acceptable at the time but both have an independent, non-conformist spirit. Hardy demonstrates this by giving Eustacia one particular quality of character - even though much of her life is lived as if in an illusion, she is realistic about herself. She is honest in this regard and knows her own faults even though she is not able to accept or change her fate in life. To conclude, the way in which Hardy uses a whole chapter to introduce one character, filled with detail, is to really bring a clear image for the readers. This clear image is then easy to recall and Eustacia being a main character, and an important one (representing the social criticism that Hardy is trying to bring across) makes it easier for the readers to understand Hardy's point of view. Hardy's portrayal of Eustacia Vye has given us one of his most memorable literary creations - a character with many different traits that at times seem to go against each other. Michaela Gough 1 Mrs. Weston ...read more.